Frog's Eye View of the Election

There is a Chinese saying, 井底之蛙, the frog at the bottom of the well. I refers to the narrow view of the sky that a frog has when it sits at the bottom of a well. Anthropologists are like frogs in that they study a village, a school, a lab, or a few families, and try to learn something from knowing their viewpoint in great depth. In that spirit, I have a few observations on the midterm election from my corner of the US, my little well.

All the major media focused on Josh Hawley's victory over Claire McCaskill, which was a major race in the Senate. Now all but one state-wide positions are held by Republicans. The only exception is the post of Auditor, which is held by Nicole Galloway, who was just re-elected. What is very surprising, however, was how narrowly she won. (The table below is from the NY Times.) 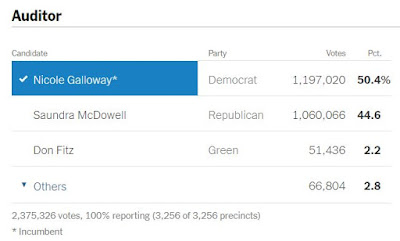 This election should not have been close. Here is how the St Louis Post Dispatch, St Louis' only newspaper, editorialized on the race:

State auditor: There is only one qualified candidate on the ballot, Democratic State Auditor Nicole Galloway. Her performance since becoming auditor in 2015 has been impeccable. Her GOP opponent, Saundra McDowell, has tried hard to distract voters from her own numerous, disqualifying shortcomings, including a years-long track record of unpaid debts and court judgments. Galloway is the only viable choice. Vote for Nicole Galloway.

Granted, the Post Dispatch tends to be liberal and pro-Democratic, but this case seemed pretty uncontroversial. McDowell, the Republican candidate, had won a four-way primary with only 33 percent of the vote, and did not seem to be a strong candidate (see details of her financial problems here). One weakness of Galloway may have been that she had been appointed by the previous Democratic governor when the previous auditor died, so she had not run for the office before, and perhaps did not have name recognition, though she did have an advantage as an incumbent. Plus, Galloway was considered effective, and there were no scandals or problems during her term. My friends here assured me there was no way the Republican McDowell could win, even though a poll in August showed McDowell ahead. They claimed the Republican party was not supporting McDowell.

It is therefore all the more astonishing that she got 44.6% of the statewide vote. 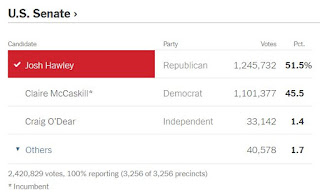 Look at the Hawley-McCaskill race in this light. The Galloway race shows Hawley began the campaign with at least 1,060,000 hard core votes (what the Taiwanese call "iron votes" 鐵票). Missouri is clearly a solidly red state. This is not only clear because all state-wide officials except Galloway are Republicans, and because of the map showing that McCaskill only won in the cities (though note that the cities have much more population than the rural counties, some of which only have a few thousand voters, compared to almost 400,000 in St Louis County. You can see the county by county numbers on the original of this diagram at the NY Times.). 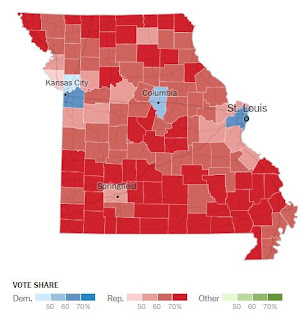 It is also because even when a qualified Democratic candidate runs against a very weak Republican candidate, she can barely win. McCaskill was very popular in certain areas, but the consensus is she lost the race in the rural areas. What the auditor's race shows, however, is that an increasing number of voters in Missouri are "cultural voters," voters who vote for the party that they feel best represents their values, not for a candidate based on qualifications or even on current issues.

This is why Hawley was not hurt by becoming a national joke (as my local liberal newspaper put it) for running an ad claiming he wants to protect people with pre-existing conditions, even though he is one of the state attorney generals suing to undermine the Affordable Care Act, which sets that requirement. If his lawsuit succeeds, it ends the requirement that insurance companies accept clients with pre-exisiting conditions. And this is why he was not hurt by a story uncovered by the Kansas City Star that Hawley had hired consultants on the state payroll to tell him how to run the Attorney General's office. If the vast majority of voters are voting on cultural issues, on resonance with the party, then debating rationally about policies and goals is pretty pointless, even irrational.

Missouri used to be considered a bellwether of national trends, but no more. It is now solidly a Red state, like most of the old Confederacy.

Thanks, Jo, for a smart summary. Here's hoping others share your frog view. BTW, even you're ever in the Denver area, please let me know. I'd welcome getting together for gab. Stay well.

I must say, I thought this was a pretty interesting read when it comes to this topic. Liked the material. . .
Remodeling contractor in Saint Louis Mo