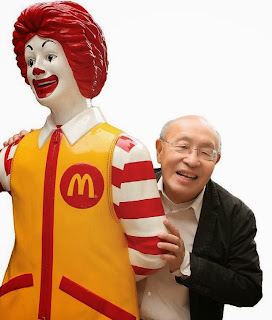 Last week I attended a memorial for Daniel Ng, the entrepreneur who brought McDonald's to Hong Kong. He had a PhD in chemical engineering and worked first in the US (and I understand he had a patent for a fuel cell for pacemakers), and then at 35 years of age in 1972 moved back to Hong Kong to work with a venture capital fund. In 1974 he went back to Chicago for a year to learn the McDonald’s system, before opening his first restaurant in Hong Kong in 1975. He had a 20 year franchise and was extraordinarily successful, so that when McDonald’s exercised its option to buy back the franchise, he was very wealthy. He ran the company so well, and kept McDonald’s prices so low, that no other hamburger chain has ever had much success in HK. It was he who suggested the "Big Mac Index" to the Economist.

I knew him because he was the primary supporter of AFS Hong Kong, and was the chairman of the board, on which I am a member. The success of McDonald’s in HK was due to many factors, but top among them were: 1) his deep understanding of branding (he also created a logo and brand image for AFS worldwide); 2) his sense of humor and love of fun (he liked McD because it sold fun); and 3) his belief in persistence and determination. Apparently he loved a quotation from Calvin Coolidge to this effect, but while Coolidge said talent, genius and education were not enough, Daniel had all those characteristics PLUS persistence!

Daniel was quirky. One friend described him as “weird,” even. But he was genuine. He was gentle, and not abrasive, but decisive. Often he got his point across with humor. Whether due to intelligence, experience, or a well developed “executive function” in the brain, he was very decisive. He was completely bi-lingual and bi-cultural, with native English and Cantonese. He was also apparently notorious among his friends for only buying second-hand cars, and not spending a lot of money on clothes (those who know me will see why I feel a connection with him).

He was passionate about many things. He was a strong supporter of music, and commissioned a number of works to promote young composers. He was a strong supporter of the Ronald McDonald House and had been working in the past few years to make sure that a second house would be opened with the new specialty pediatric hospital on Kai Tak. And he was a strong believer in intercultural understanding. He wanted Hong Kong youth to be more cosmopolitan by going overseas on exchanges, and by meeting exchange students who come to Hong Kong for a year. He did not suffer fools, and he thought a particular horse-related charity in Hong Kong was being very narrow-minded when they decided only to sponsor outgoing Hong Kong students and not incoming foreign students (they claimed they only wanted to support Hong Kong students, as if Hong Kong students don’t benefit from having an exchange student in their midst).

Daniel died on August 23rd of cancer at age 76, which is still young by today’s standards. As his children’s statement put it, He had been ill for some time, but never wanted to let anyone know, choosing as always to focus on living. he had a formidable spirit, insatiable curiosity and zest for life that served him well even at the end.” His memorial was attended by probably over 400 persons, and it was by invitation only, or it would have been many, many more. Everyone had humorous stories to tell. Former employees and colleagues were very grateful for his mentoring and guidance.

There is one image of Daniel that captures his youthful spirit for me. Years ago, shortly after the iPhone first came out, he already had one. He also had several apps, and he had a blast showing them off. He had the “lighter app” that would allow you to hold up a “lighter” at a rock concert, and he had the “beer app,” which appears to fill the iPhone screen with beer, and then allows you to “drink” the beer as you tilt the iPhone to your mouth. He loved to laugh. Almost every picture you will find of Daniel has him smiling broadly or laughing. He was truly an impressive figure.