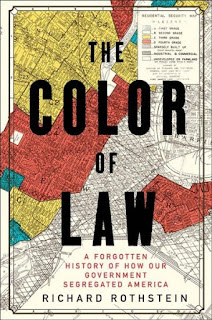 I heard a very interesting NPR Fresh Air interview withRichard Rothstein yesterday on the podcast while doing errands (transcript here). He has just published a book that shows how US federal government policies during the New Deal (1933-1941) had systematically discriminated against Blacks. He noted, for example, that the term “redlining” referred to government maps that had neighborhoods marked with a red line where government loans were not allowed because residents of those neighborhoods were Black. I thought I had heard him on Fresh Air before, so I googled his name. Sure enough, I found that he was a guest on Fresh Air almost two years ago.

In my google search, I stumbled across a right wing blog by Jack Coleman of the Media Research Center’s “News Busters” (which claims to expose "liberal bias") that has a severely distorted take on Rothstein’s argument, and it—and especially the comments section—show serious lack of understanding of social forces.

First the distortions. Coleman begins by implying that though FDR is an iconic leader for liberals, his record with the New Deal is problematic. He then includes a transcript of sections of the Fresh Air interview, with key parts in bold, to highlight the facts raised by Rothstein. These facts (accurately reported) include:


Coleman also highlights a part of the interview where Rothstein mentions that George Romney (Mitt’s father and former governor of Michigan) had tried, as Nixon’s Secretary of Housing and Urban Development, to only offer federal funds to communities that desegregated, but was blocked by the Nixon administration. He somehow thinks this exonerates Republicans from being charged with racism; seems to me it only exonerates Romney the Elder. Coleman also notes that unions prevented Blacks from joining, and that this discrimination was endorsed by the National Labor Relations Board, so was not merely a local action. Only after 1964 was this reversed. Again, this is supposed to indict all labor unions (American conservatives hate unions), but my take is that racism was deep-seated and made worse by state action, not that racism was somehow inherent in labor unions.

Rothstein’s point is made clear when he notes that for most Americans, homeownership is the main way that wealth was created and accumulated, and since subsidized home ownership was not possible for Blacks, it resulted in much lower levels of wealth for Blacks. While Blacks earn 60% as much as whites, they own only 5% as much wealth as whites. This provides Blacks with less of a buffer, which is why Blacks suffered more than whites from the Great Recession of 2008.

(As an aside, Rothstein repeats many of these points in his 2017 interview, including these 60% and 5% numbers. I checked the transcripts to see if the 2017 interview was not a repeat of the 2015 interview, but it is a new interview, albeit with some repetition. A good interviewee knows how to tell a story and focus on the core message, even if he/she is repeating himself. If I had been interviewed, I might have assumed listeners had heard me the first time, or would be annoyed by my repetition. As it happens, I only vaguely remembered the first interview, so he was right to repeat himself.)

Coleman’s take on all this is to imply that liberals have suppressed this information because it conveniently “perpetuates the myth that the Republicans are solely responsible for racism in this country.” This “myth” is, in fact, a surprise to me. A myth of a myth. While the Republicans are indeed the party of racism today, they were clearly the opposite from Lincoln through to Eisenhower. Coleman displays fake surprise that a Berkeley professor would do such research, and that such a story would end up on “liberal media.” This is rather disingenuous, since it is liberals in general who are concerned with questions of inequality (conservatives assume a free market would reduce inequality; they do not believe Picketty). Coleman likes the story only because he thinks it undermines the ideals and practices of the New Deal, which conservatives love to hate.

Implicit in Coleman’s critique is also the idea that if it had not been for “government interference,” there would not have been any discrimination. That is not how most liberals will take this story. They will see it as a case of how despite the liberal intentions of the FDR administration, Black interests were sacrificed because of racist notions at the time. Liberals will not see this story as undermining the New Deal. But conservatives are right that “good intentions” and government programs have the potential to cause great harm. Of course, not acting can also cause or perpetuate great harm.

The most up-voted comments to Coleman’s blog shows that right wing Americans are intensely individualistic. One comment is a resentful attack against “victimhood”, particularly of “blaming conservatives and Republicans, and whites in general.” Addressing Blacks, he/she says:

Stop blaming whites, stop blaming slavery, stop blaming Jim Crow and segragation [sic] and start taking an independent initiative to make a better life for yourself and your family. Continue to blame whites and don't be surprised to find your children and grandchildren still living in ghettos for generations to come.

Until a spotlight is turned on black inner city culture...nothing will change. It's not about race...but it's always been about culture. Getting an education, being married, and bringing up your children to do the same is a large part of the answer. Why can't anyone say that in public today?

Because it is simplistic and wrong?

That writer falls back on the common “blame the victim” argument: Blacks are poor because of their individual behavior, because of their (implicitly) dysfunctional culture. Americans are intensely individualist and ahistorical. These commentators are not interested in how the past affects the present. Interestingly, they are not even following the logic of the blog (and the book), which is that federal government intervention made poverty worse for Blacks. These readers assume that by getting an education, being married, etc., one can single-handedly pull oneself up by the bootstraps, as the expression goes. The institutional factors like redlining that disadvantaged Blacks are completely ignored. While Rothstein is making institutional racism even more dramatically clear with his research, these commentators insist on individuals being Horatio Alger. They are saying, OK, racism happened, but get over it! Move on! If only it were so easy.

There are important individual choices that each person makes that affect their lifecourse. But any basic social science course (by which I mean sociology, anthropology, political science; not economics) will also teach us that we do not make these choices entirely freely. Interestingly, conservatives in Europe are more aware of the importance of institutions and historical forces in shaping our individual choices. American conservatives have perhaps studied too much economics, and reduce everything to the individual. We need better ways of integrating the structural forces of society with individual choices. This has, in fact, been one of the main issues in anthropology over the past 40 years. But there is little hope for the US politically if many people cannot see structural forces, and even misread research like Rothstein’s and think it only means individuals need to make better choices.
Posted by JB at 10:34 AM