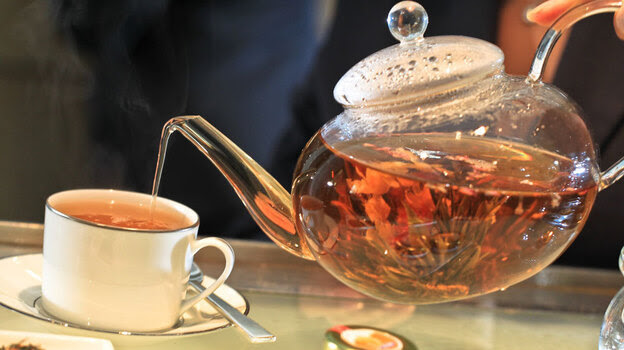 I heard an NPR story about the health benefits of tea that commented on the American habit of adding milk to tea (see NPR link here). Apparently, in the US Starbucks even has a green tea latte. The audio version of the story treats the Chinese view that one should not add milk to green tea as exotic and snobbish, the view of a purist. I've obviously been in Asia too long, because the idea of milk with green tea is an abomination to me. Yuck. But the tone of the reporter, treating this view as amusing, surprised and annoyed me. His idea that you could add milk to high quality "dragon well tea" (I kid you not--he actually said that!) made me think of the Chinese practice of adding Sprite soda to French red wines (not all Chinese; just some nouveaux riches). That practice is mocked by Americans, and yet he was not in the least self-conscious about his practice of adulterating high quality tea. I suppose a true relativist would say, "to each his own."

It is days before the US presidential election, and most news media are claiming the election is too close to call, or a tossup. This may or may not be true; the NY Times blog Fivethirtyeight by Nate Silver does the neat trick of aggregating surveys and it predicts Obama will win, but even he recognizes in his Nov. 2nd post that bias in the polls could mean Romney could still win. He says this is unlikely, however, because the polls have been fairly consistent and accurate over the recent elections. Silver is also more accurate because he focuses on the Electoral College, and not on the popular vote. It seems that the Obama camp advertized heavily in the summer in the swing states and so is running more strongly there than expected when compared to the rest of the nation, making it much more difficult for Romney to win those states and thus the election.

Still, there is uncertainty in the election's outcome. I find it fascinating that at the moment, both Obama and Romney are even. But whoever fails to get 270 seats in the Electoral College will be a "loser." We will "know" that he waffled too much on too many positions, or he was too weak as a leader. The arguments explaining the failure are all there, but held back by the uncertainty of the outcome. Once we know the outcome, we'll know who the "loser" is. It amazing, given that close to half the country is going to vote for the "loser." But the same thing happens in sports. Two weeks ago, Stanford failed to score a touchdown against Notre Dame from first and goal at the 4. The last attempt was a run up the middle, and Stanford supporters felt the back got in on his second effort, but the play was ruled dead. Stanford lost the game, and Notre Dame, though barely surviving, has gone on to beat Oklahoma and is now ranked #3 in the country. But even if you lose by inches, you still lost. And winning the popular vote does not make up for losing in the Electoral College; just as Al Gore.

We also don't know who will win the Indiana senate race. There, Congressman Joe Donnelly decided to run for Senate because he was quite sure to lose his seat, which happens to be my family's home town of South Bend. He had barely held on in 2010, and saw the writing on the wall. He was not expected to win the Senate race against Richard Lugar, the long serving Republican senator. But the Lugar lost the primary to Richard Mourdock, a Tea Party Republican. Mourdock then said in a televised debate that pregnancies from rape are "something God intended to happen." His support is now plummeting. Donnelly, who looked like a loser just a week ago, is now, it seems, going to be a winner. In politics, and sports, it is winner take all.
Posted by JB at 2:25 AM 1 comment: