The Press, China, and Cross-Cultural Communication

Many Americans would be surprised to find out how many Chinese students in the US are not very happy with their host country. I don't know the percentage, and maybe my sample is biased, but I do think most Americans assume the rest of the worlds wants to be American, which is at best a gross exaggeration and over-generalization. One thing I find many Chinese students complain about is the anti-China bias in US media. At first this was hard for me to understand. In part, students who complain that the US focuses too much on Tiananmen Square are a bit biased themselves, since they don't know anything about it so of course think if it as a minor issue. But they do have some points. Here is an article entitled "Westerners are so convinced China is a dystopian hellscape they'll share anything that confirms it" that points out that stories published in Time, CBS News, and Huffington Post that were totally wrong (even absurd) were re-posted as though they were true. Such stories, to a Chinese reader, suggest a hostile intent on the poster, and stupidity on the reader for believing such stories are possible. Who could believe that giant screens show the sunrise to compensate for the heavy pollution in Beijing?!

Unfortunately, cross-cultural understanding is not easy. There is a heart-breaking column by Helen Gao in the NY Times where she describes the rejection she faces from family and friends because she has studied seven years overseas. Even when she says the same criticism about pollution or politics as others, it is seen as inappropriate coming from her who has spent time abroad. At the same time, these same people have unrealistic images of the US:


Like someone gazing out a window but staring only at his own reflection, many Chinese look at America in ways that are colored by their feelings toward China. The United States they see — a nation with a pristine environment, perfect schools, generous welfare and complete political transparency — is a figment of their imagination, custom-made in stark contrast to the reality we live in.

It has long been the fate of bicultural persons not to be trusted by either side. When the English arrived in North America, they exchanged young boys with the natives so each side would have native speakers of each other's language. This was an early type of AFS intercultural exchange! The boys would then go back to their own cultures to act as language and cultural interpreters. They were not trusted, however; . They would often try to make their countrymen see the situation from "both sides", which, under tense situations, would be perceived as disloyalty. It is the dilemma of cultural exchange and cross-cultural competence: we need to foster it to avoid international conflict, yet those who have these essential skills are often the ones who suffer the most for their competence. They have greater understanding (of both sides), but are often ignored or even rejected for their "deviant" ideas. When Helen Gao notes that she cannot repeat a friend's statement because it will be interpreted differently due to her time in the US, we see that there is really no central, unbiased point or position from which we can look at the world. There is no neutral "objective" space,  though we all try to stand there. But crazy stories about China do not help create that space, or the trust that is necessary for communication.
Posted by JB at 1:59 PM No comments: 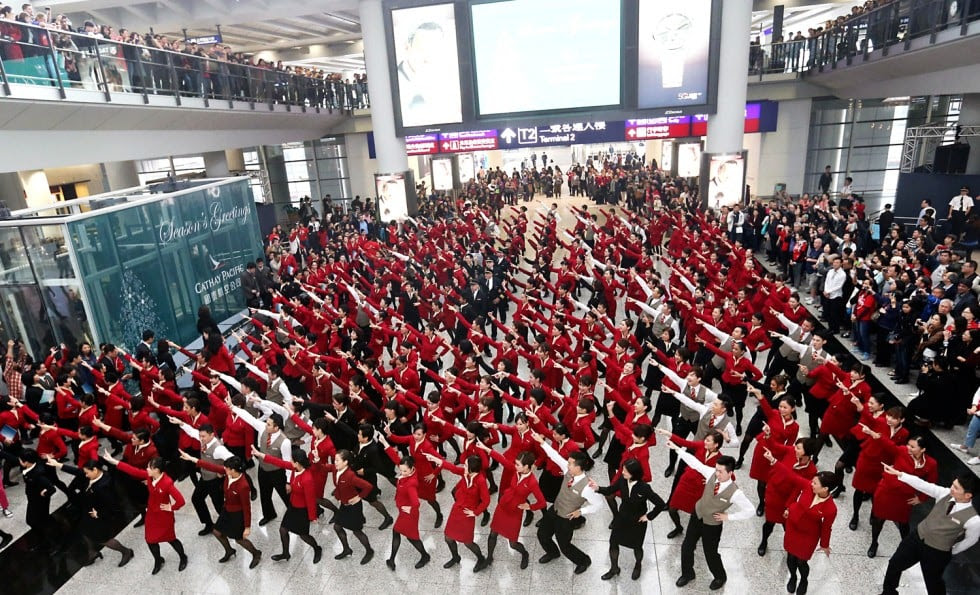 Going through some old newspapers from early December, I came across an intriguing picture of several hundred Cathay Pacific attendants dancing in the arrival lobby of the Hong Kong airport. The online article has an SCMP video embedded, and there are a number of videos of the event on Youtube (see here, and here for a longer version showing the choir, and here for a more professional version). It is fun, and features my favorite airline. It was also part of "Operation Santa Claus," which is a good fundraiser run by our public radio and the SCMP (I'm not clear how this raised funds, however).

I do have a quibble with the term "flash mob," however, and it reflects something about Hong Kong. A flash mob is not supposed to be so well-planned, or be so purposeful. The Wiki entry for "flash mob" says it "is a group of people who assemble suddenly in a public place, perform an unusual and seemingly pointless act for a brief time, then quickly disperse, often for the purposes of entertainment, satire, and artistic expression."  It notes that for planned social activities and PR stunts, the term used should be "smart mob."

This stunt was well coordinated: the videos show guards keeping the space empty, the music is played over the airport PA system, and the dancing is choreographed. (Hmm, I wonder if they paid royalties for the music they played; might be a violation of HK's strict copyright laws!).

I think the term "flash mob" is being applied here for two reasons (in addition to the fact that worldwide, companies have used the term for stunts that then become viral online commercials). First, last year (2012) a much smaller less formal such event was held that was probably  more like a flash  mob. This year, more professionals got involved, including the fundraising aspect, so perhaps what was more like a flash mob has evolved into something more choreographed, but the name has not changed. But in addition, there is a tendency in Hong Kong for little to be truly spontaneous. Like elections (even student elections on campus), the idea of it being spontaneous is attractive, but everyone likes to know the result ahead of time (in fact, on campus elections, there is always only one ticket running for all the offices). In this case, you can actually see dozens of spectators anticipating the event, waiting for it to start (probably friends of family of the participants!)

A true flash mob is actually a bit like vandalism; it can cause congestion, not to mention accidents and injuries to bystanders who do not expect dancers to be in their way as they walk through an airport or a train station. Yet we seem to like the incongruity of a show (and a well choreographed one at that) in a public place. That is part of what makes it fun, even if it is, after all, a PR event. At least this is for a fund raiser and not just to try to convince us that Cathay Pacific staff are one big happy family who just love to take care of clients. Their staff is well trained and does offer a high level of service, but they are, after all, employees. It will be interesting to see how this event evolves in the next few years.
Posted by JB at 1:02 PM No comments: