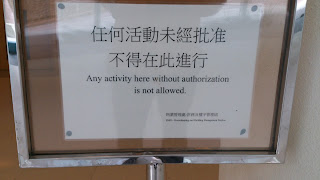 This is a snapshot of a sign in the middle of the large lobby of the Esther Lee Building at CUHK. In case it is hard to read, it says, "Any activity here without authorization is not allowed." It is signed "EMO" [Estate Management Office] "Housekeeping and Building Management Section."

This strikes me as a tad authoritarian. It reminds me of the principle for parking in Hong Kong: you can only park where parking is expressly designated as allowed, not anywhere that it is not forbidden. Rather than specify what it is that EMO is trying to avoid, they avoid everything, and make everyone seek EMO permission to use the space. There is no number to call to get permission; the message is clearly: go away.

Since this is the lobby to many auditoriums and concert venues, it is clear that EMO cannot have students rehearsing their "dem-beats" (a form of cheering) in the lobby. At the same time, such a sign is not very welcoming to visitors, I would think. I've shown the picture to several students and friends, and they all also found it a bit odd. It is not representative of CUHK overall, but there is this strand of thinking in the university, and in Hong Kong generally, that perhaps harks back to colonial practice. Or to the Qin dynasty.