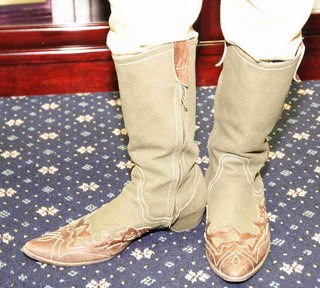 In November 2005, an exchange student from the US asked a funny question in my class. We were discussing an article that explained how Marlboro had to change Hong Kong smokers' image of the cowboy from a "cow herd" 牛郎 to the ranch and horse owner that Hong Kong consumers could aspire to. No one in Hong Kong would aspire to be the hired hand who had to take care of dumb cows. The student, out of the blue, asked, "Why do Hong Kong people wear cowboy boots?" It had nothing to do with our class discussion, but it turned out to be quite interesting, because the Hong Kong students denied that the boots were cowboy boots. They said that if they looked like cowboy boots, it was just because of fashion. It turns out that some Hong students think cowboy boots have to have spurs. Above you see an example of a pair of boots worn by a student. These are mostly canvas, are softer and floppier than American cowboy boots, and they have a zipper on the inside. 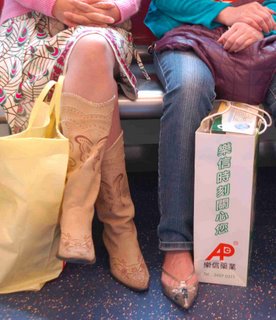 The Hong Kong students were adamant that these are not cowboy boots, and seemed puzzled that anyone would connect them with American culture. The Americans were equally adamant that they were really cowboy boots. Certainly, from an American point of view, the design, the loops at the top (used in real boots to pull them on), and the shape and height all do look like cowboy boots. But, if Hong Kong consumers do not think of them as cowboy boots, make no connection with America, and buy them because they are fashionable, are they cowboy boots? These boots were popular in Italy in the winter of 2004-05, and spread to Hong Kong a year later. In February 2006, I saw them in the US as well, but they were new--and odd to American exchange students who had been studying in Hong Kong in the Fall of 2005.
Posted by JB at 10:10 PM

see? that's a great blog entry! you will soon be a FB man. I would like to comment that we call those sh**-kickers, not cowboy boots (except around Sydney, who is dying to have a pair of cowboy boots).