I remember the frustration of skiing when I was a college student, living in Innsbruck, Austria, during my sophomore (2nd) year abroad (learning German, of all things--an exotic language for a family of Romance language speakers!). One day I would feel like I had made tremendous progress, and could go flying down the hills. The next time, it would be awful--constant falling, frustration, no balance. I had a folk theory that after a good day, I would get cocky, and the next time on the slopes I would assume I was a much better a skier than I really was. I was falling more because I had gotten a big head. My "big head" made me unbalanced, more prone to falling. But the point is, progress comes in fits and starts. It was the same for learning German: some days I felt like I was making a lot of progress, understanding a lot and speaking fluently, while other days I felt like an idiot, unable to understand basic German.

Fieldwork is a bit the same. We tend to imagine fieldwork as the time interacting with people, collecting information, observing rituals. But actually, we spend much more time writing up our notes than we do collecting them. Or maybe I should say that part of "collecting" data is actually the process of putting them down in writing. If they are not written down, they are not really data. They will be forgotten, or worse, distorted by our evolving memory. 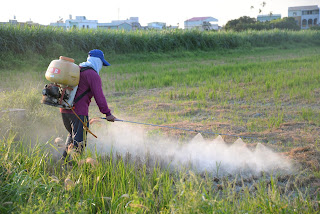 Twice, now, I was feeling low about fieldwork, but then fortuitously things turned around. First, I have to say, returning to a place where I had done fieldwork 30 years ago made entry to the field very easy. The second day here, a neighbor took me out to his field where he was spraying herbicide and gave me an outstanding lecture laying out all the types of herbicide and considerations on which to use when. (BTW, did you know that mice and snakes can make a hole in the boundary of the paddy field and cause the water to all drain out overnight? Interesting.) He was not someone I knew before; I had just met him the night before, at a nighttime tea gathering with my host family. He was kind enough to say, "Tomorrow I'm spreading herbicide; do you want to come and see?" It was all because I had the bona fides of my hosts.

Still, finding informants is still not that easy. I can't expect my hosts to take me around everywhere. And sometimes it can be hard to meet and find people to interview. People are busy, and they don't necessarily see any point in explaining things to an anthropologist who does not know anything. And some times, my foreign language abilities combined with lack of knowledge of farming and the normal confusion of human conversations conspires to make me look really dumb. Two days ago, while interviewing a man who runs a nursery, the conversation switched from planting red beans (adzuki, or 紅豆) to a machine that he was using to put seeds in a plastic tray with small cones of dirt. I said something like, "You use this machine for red beans?" and I saw his face turn, either contemptuous or frustrated at my ignorance, and he said, "That is not how we plant red beans!" Actually, I knew that, which is why I asked with such surprise. They used to plant red beans by hand, lifting the soil up with a special tool and putting seeds 2 cm under ground so birds could not get at them, but now they plant closer to the surface, even just by broadcasting. I felt bad that I had looked foolish, and made him wonder if he was wasting his time. Of course, he was a busy man, so yes, talking to me was a waste of his time. In any case, we had interviewed his son, who is a very impressive pesticide vendor, very knowledgeable, articulate, and patient, so messing up on the interview with his father was not too bad, but frustrating. Then I've spent the last three days mostly editing and coding transcriptions of recorded interviews. They are so rich, and there is so much to learn, that I'm spending hours in my room, listening, writing, and searching on the web for pictures of bugs and vegetables that I don't know. And, last night, I did not know who to interview next. I have two interviews next week, but had nothing for today. 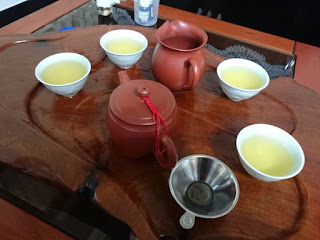 It is true everywhere, I believe, that if you have an introduction, people will open up to you. Introductions are less important--and less common--in the US. But in Taiwan, if someone simply says "I know this guy, Joe, from the Chinese University in Hong Kong, and he wants to talk to you," people are generally remarkably hospitable. I mean exceptionally hospitable, and open. Of course everyone always presents themselves in a good light, but there are some people who are quite cautious, while with an introduction, they will also discuss contradictions and what is really going on. (Some Mainland scholars I once brought to Taiwan for a workshop said that "Taiwan is fieldwork paradise" (台灣是田野天堂)--though southern Fujian was also very good, at least for research on religion. The Taiwanese custom of drinking tea in small cups, and sitting around while chatting, makes fieldwork very pleasant. (Unfortunately, that style of tea drinking is often called 老人茶, old-people's tea, suggesting that it increasingly does not fit a high-pressure world with little true leisure. Even when you are not working, you are supposed to be "doing something" or going somewhere, not sitting around drinking tea and chatting.)

But I was a bit stymied in trying to interview one important organization. The person I had met at a farmer's meeting had seemed aloof at the time (but he was also going to be a speaker, so it was not necessarily personal). But when my assistant contacted him to schedule an interview, he transferred us to his assistant, who said that they are very busy now, as this is the busy season. This was patently not true: this is a slack season. Most land is planted in "green manure," a plant that will be plowed under in a month or so before they plant red beans. So now is the best time for interviews. She--and he--clearly did not want to bother with me, and was using a ridiculous excuse to avoid simply saying "No." Fair enough. But how should I proceed? So I asked my host if he could give me an introduction.

I expected him to make some phone calls and tell me who to see, maybe next week. Instead, he called right then, and his friend turned out to be the head of the organization I wanted to know about. His friend, it turned out, was not busy, so invited us over for tea. So we hopped into the car and drove over there. Fortunately, I brought my recorder, because we ended up staying there for an hour and 20 min, and had lunch (simple but tasty 便當 box lunches). Though I had not prepared detailed questions, we had an open ended interview and got a great perspective on red bean farming. What a coup! We not only met the boss, but were introduced to his secretary, and were told to ask her for any help in the future. And, in the office, a woman I had known 30 years ago came forward and we re-established a connection, so I can call on her if necessary as well. So, from feeling a bit stuck and down, I've come back with an excellent interview, and the introductions and connections for future follow-ups.

So fieldwork is like skiing. Some times, when you feel down and like you are not making progress, a burst of progress or luck will come along. Progress comes in spurts, like "punctuated equilibrium." Even in Taiwan, where the fruit is sweet and conditions are relatively easy.
Posted by JB at 3:33 PM