Ever since I first heard about "cultural appropriation," I've had a skeptical, eye-rolling kind of reaction to the term. As an anthropologist, I recognize that all of culture is borrowed from other places, and the notion that some cultural practice or object "belongs" to one "people" makes me uncomfortable. One of the more famous articles in anthropology, "Body Rituals Among the Nacirema" by Horace Miner (1956) points to the foreign origins of many daily customs. 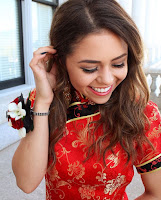 So I reacted with the same "eye roll" when I read Amy Qin's NY Times article about the American controversy caused by a high school girl in Utah who wore a qipao 旗袍 (a dress usually known in English by it's Cantonese name cheung sam 長衫) to her prom. Qin's article does an excellent job of showing how problematic the notion of "cultural appropriation" is for the qipao, since it is not originally Chinese but Manchu, and only took its current tight-fitting form in the 1920s. Most interesting was that Chinese living in Asia thought it was positive that a "Chinese" style was viewed as beautiful and popular in the US, and could not understand what the objections were.

The question of cultural appropriation has been debated for a long time (see for example here). Some feel very strongly that it is a form of theft, or they object to politically powerful groups using styles of weaker groups. Of course, it is problematic when these styles are worn as costumes, in ways that could be viewed as mockery (like at Halloween or Carnival). But it seems very different when people wear a style because they think it is beautiful.

I think the specifics of each case need to be examined to see whether it is a case of appropriation or appreciation, though I generally do not accept that any culture "owns" culture. Today's NPR Morning Edition had an interesting example. The singer Angélique Kidjo from Benin has just released an album that is entirely a cover of all the songs on the Talking Heads' album Once in a Lifetime. She commented on how when she was in Paris in 1983 and first heard Once in a Lifetime, she knew right away that it was African music, though her friends did not realize it and even argued it could not be. She says of cultural appropriation:


I always say, when you are inspired by a music, and you acknowledge that source of inspiration, it is cultural expansion. But when you deliberately take somebody's music and put your name on it, it's not even cultural appropriation, it's stealing — period. Cultural appropriation doesn't exist.

The Talking Heads, when they released this album, in the press release they acknowledge the fact they were listening to Fela [Kuti] when they did this album. They were reading the book [African Rhythms and African Sensibility] of [John Miller] Chernoff, and they tell people, "You want to understand our album? Listen to Fela and read the book." 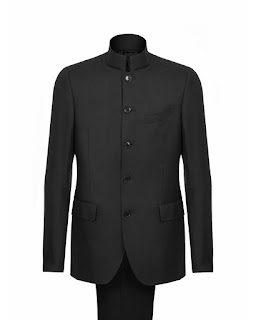 I also feel like cultural appropriation does not exist. But that does not mean I'm comfortable wearing any kind of "ethnic" clothes. Shanghai Tang has been a luxury fashion house that opened in Hong Kong in 1994. They have created a "Chinese chic" style, intended to celebrate and modernize Chinese fashions. I have always admired their elegant mandarin-collar suits, and my wife has worn their clothes. But I have never felt like wearing one of their suits (and not only because they are extremely expensive!).  As a white guy who speaks Chinese, I feel like wearing a mandarin collar suit would be a bit too much, like saying I was trying to pass as Chinese, or to be Chinese. It is true, of course, that when I was doing fieldwork, I did all I could to fit in and "pass." But that only involved shaving my mustache and buying local versions of Western clothes, not something as Asian as a mandarin collar suit. Going around Hong Kong dressed in a sort of chic "national suit" seemed a bit over the top. Maybe if I had more panache I could pull it off. And if others with panache blaze a trail, perhaps I'll follow.

I have worn a mian-ao 棉襖, the padded cotton jacket that is arguably more "Chinese" than a Shanghai Tang suit is. Mian-ao are warm and very comfortable. I have a thick one with a silky exterior, and a thin one of rough cotton from Silk Alley in Beijing. When I lived in Hong Kong, I learned to avoid wearing them outside the house, or people would comment on it and laugh a bit. The cotton padded one is actually kind of old fashioned; it is something grandpas seem to wear. The lighter one from Silk Alley was more trendy, but it was still seen as odd or somehow incongruous on a white guy. You could say I did not have the courage to wear it. After all, the clothes you wear are a statement about yourself (whether you realize it or not). I don't like my clothes to be flashy; I just want them to make me fit in.

So it was not because I was worried about "cultural appropriation" that I did not wear a mian-ao or mandarin-collar suit, but because because of what I thought others might think I was trying to say.

Cultural appropriation was not a worry for the Chinese tourists in Tokyo, Japan, who dressed in kimonos for photos at the Sensō-ji temple at Asakusa. The kimonos are clearly cheap imitations of the beautiful kimonos that you can occasionally see Japanese women wearing. Initially it struck me as odd that Chinese tourists would want to dress like this and take photos. But the more I have thought about it, the more I see this is a good sign. Despite all the nationalistic fervor being whipped up by the mainland government against Japan, and despite national antagonism on both sides, these women were willing to pay money to put themselves not just in Japanese people's shoes, but in their clothes, at least for an hour or so. One can only hope that this kind of cross dressing leads to at least a little cross-cultural understanding.