The Biden-Harris Inauguration: "And the Flag Was Still There" 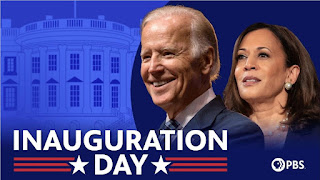 I have never paid much attention to presidential inaugurations before. In fact, I remember more than one person in rural Taiwan in January 1985 asking me if I was going back to the US for Reagan's 2nd inauguration, and I thought it was the most ridiculous question I'd ever been asked. First of all, I never even watched the news coverage of past inaugurations; it seemed like meaningless pomp. Secondly, I was not some sort of VIP who could actually attend the inauguration.

But after four years of norm-breaking and two months of lies about the election being "stolen," and then most importantly, after the mob insurrection at the capitol building, I found myself unable to concentrate on anything but the transition, and ended up watching at least five hours of TV coverage of the inauguration.

Mostly I just felt relief that what to me has been a nightmare of stoked divisions, pettiness and hate is over. I was surprised that I also found several moments moving. I don't believe in rah-rah jingoism, but had to smile when Lady Gaga pointed to the flag over the capitol building when she sang the part of the national anthem that goes, "And the flag was still there" (CNN missed the moment, but you can see her turn around and point to the flag in the video here; start at about the 2:00 point).

And I was moved by the young poet Amanda Gorman (video here), which is surprising because I don't normally care much for poetry. But the way she spoke, and the way she moved her hands, as well as the words she chose, spoke for many.

In part, she said:

We've seen a force that would shatter our nationrather than share it.Would destroy our country if it meant delaying democracy.And this effort very nearly succeeded.But while democracy can be periodically delayed,it can never be permanently defeated.In this truth,in this faith we trust.For while we have our eyes on the future,history has its eyes on us.

Biden's inauguration speech also focused on how democracy has survived but takes constant effort. Here is what he said, along with the annotation from the Washington Post:

We’ve learned again that democracy is precious. Democracy is fragile. At this hour, my friends, democracy has prevailed1.

1 Throughout the speech, Biden intersperses the idea that democracy and our system of government have triumphed over threats, while acknowledging that victory isn't final. — Aaron Blake 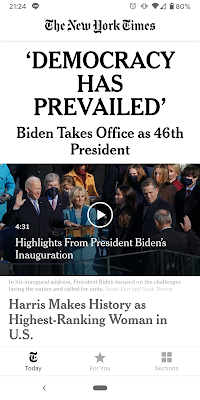 By 9:24 pm when I took this screenshot of my phone, the New York Times expressed many Americans' sense of relief that we had survived Trump with democracy intact. The Russian commentators who gleefully said the US was falling apart and that American democracy was a sham were shown to be wrong (at least for now).

The January 6th insurrection has changed a lot. A number of commentators on TV said that Americans took their institutions for granted, but seeing them at risk, and seeing how vulnerable institutions are to violence and "the big lie," has made people realize that democratic institutions need to be fostered and constantly rebuilt, and cannot be taken for granted.

I have to admit that I always took for granted the peaceful transfer of power, and did not fully understand until this year how important and significant it is (though I remember my father saying so). Even when Al Gore conceded in 2000, I saw it as necessary once his legal remedies had been exhausted. I tended to see it more as Gore accepting the inevitable, rather than sacrificing for the good of the country, even though the sacrifice narrative was widely used in the press.

We studied "The big lie" of the Nazis in school, but I thought that applied to other times and other places; I never would have imagined that it would apply to the United States today. Gore could have continued to contest the election; he had justifiable complaints that the Brooks Brothers Riot by Bush supporters, the bias of Republican Secretary of State Kathleen Harris, and the partisan 5-4 Supreme Court ruling that stopped the recount had essentially stolen the election, an election in which he had a majority of votes and only lost the Electoral College vote because of Florida's messy and disputed 537 margin of votes. But Trump created (with the help of Fox News) "the big lie" that he had actually won the election in a landslide and that it was stolen from him, simply by saying it over and over, and attacking anyone in his party who disagreed and dared to admit the truth. And as of mid-January, a CNN poll found three quarters of Republicans still did not believe Biden won the election legitimately.

The "bully pulpit" describes the power that a president's words have. Yet, sometimes presidents are able to use it, while other times they are not. Reading Obama's recent book, I'm struck at how often he was not able to convince people that what he viewed as thoughtful and balanced policies were reasonable, and yet Trump, by repeating "the big lie" that there was fraud in the election (indeed, he started saying this even before the 2016 election), managed to have most Republicans believe it. That this was possible in an open society with a free press, and over 200 years of institutionalized democracy, still surprises and worries me.

Basically, this shows the plasticity of culture; people often think of culture as fixed, as rails along which the train of society moves, but it is actually more changeable that that. A democratic culture needs to be constantly reproduced. This means that everyone has a responsibility to support and renew democratic institutions if they are to last. Yes, for now, the flag is still there. But everyone needs to re-focus their attention on core democratic values. A recent study showed that only 3.5% of respondents would change their vote if their preferred ideal candidate did something blatantly undemocratic. That has to change; voters have to care more about the democratic process itself. And if they do, the polarization of society will also decrease. Hopefully the members of the evenly divided Senate will be forced to re-learn the art of compromise, and the dysfunctional polarization can be reduced.

This is in everyone's favor, since Democrats may control all three branches of government for now, but they won't forever. In fact, if tradition holds, they will lose seats, and control of congress, in the mid-term 2022 elections. And hopefully the flag will still be there.