The Cynical Opportunism of Josh Hawley

Sometimes politicians take positions just to advance their career and gain more power, even if it goes against their moral conviction or their constituents’ desires. Dramatic examples are Boris Yeltsin, who championed “Russia” when he was president of the Russian Soviet Republic and thereby undermined Gorbachev's power and led to the dissolution of the USSR, and Boris Johnson, who was widely accused of taking the “leave” position on Brexit because it was the only apparent way he could become prime minister. They seem to view this as their shot at power, and decide to seize it.

Josh Hawley, who is the junior senator of my current state of Missouri, took a similar shot, but it has failed spectacularly. It has long been clear that he was not going to settle for being a senator. He was going to be running for president. While there is nothing wrong with ambition, Hawley stands out for his cynical dishonesty. Even before the Capitol insurrection, commentators were noting that his gambit of challenging the certification of electors was rash and dangerous, and that he certainly knows better, having gone to Stanford and Yale Law School and clerked for Supreme Court Chief Justice John Roberts.

When he ran for senator against the Democratic incumbent Claire McCaskill in 2018, he was accused of opportunism (see this NY Times article, which includes the ad he had run two years earlier accusing politicians of climbing ladders, which people were saying now applied to him). As a candidate, he claimed that he was in favor of forcing insurance companies to cover pre-existing conditions (a policy that had been part of the Affordable Care Act (ACA), AKA “Obamacare”), but at the same time, as attorney general of Missouri, he joined a Texas lawsuit that would have eliminated the ACA. He had joined the suit to prove his Republican credentials, and yet claimed that because his eldest son had a rare degenerative bone disease (a pre-existing condition), he would not risk coverage on pre-existing conditions (see ad in the article). Yet that is exactly what his lawsuit was doing. He was widely criticized for that at the time (see article that refers to his ad as "a national joke"), but in the polarized environment of 2018 Missouri, he still handily defeated McCaskill, and became the youngest member of the senate (then at 39 years of age) after only 2 years as attorney general.

In the argument over certification of votes, Hawley saw a chance to stand out from the pack. He was the first senator to announce that he would challenge the results. He did this even though McConnel had strongly urged his fellow-senators not to join in the objections of representatives. If no senator had joined, the objections would not be debated.

It is worth remembering that back on Nov. 10, a GOP official was quoted as saying of Trump’s claims that the election had been stolen, “What’s the downside for humoring him?” At the time, many assumed that the truth would ultimately come out and Biden would take office. But as Trump persisted with his lies about election fraud, and his followers overwhelmingly believed him despite no evidence being presented and over 60 court challenges being turned away, the cost to the nation became clear. Hawley’s challenge was therefore much more serious than merely a procedural or legal issue, even though it was clear it would fail, because it fed into the Trump argument that the election was unfair and stolen. And as many commentators noted, he surely knew better, which made his position even more cynical. Furthermore, he was putting other Republicans in the awkward position of having to choose between certifying the election (a mainly ceremonial task that is legally required) or joining in Trump’s fantasy.

Many representatives voted for the challenges because they fear being primaried from the right. Josh Hawley does not have that excuse. He did this to stand out, to try to inherit the Trump vote.

Hawley did not actually say that there had been fraud or cheating in the polls. He said he was objecting to the Pennsylvania legislature allowing mail-in ballots, saying that would require a constitutional amendment. Setting aside the fact that the legislature was Republican-controlled and that the US Supreme Court had already ruled and disagreed with his argument, he was being very clever: he did not join Trump in saying the election was stolen, but he left the impression that he agreed with Trump. He could claim that he was making a point of law, while most Trump supporters (voters he was courting for his run for president) would interpret it as saying the election was stolen and see him as loyal to the president.

He also was clever in saying that he was doing this on behalf of constituents who had concerns about election fairness. He argued that further investigation would reassure the public. In fact, as the Trump mob marched from the Trump rally to the Capital, Hawley’s office sent out a fundraising appeal that said, “But this is not about me! It is about the people I serve, and it is about ensuring confidence in our elections....That’s why I am standing up on behalf of the people I serve to relay their concerns to Washington. For conviction. For principle. For our country. For YOUR VOTE.”

This argument is specious, however, because he himself did nothing to correct his constituents’ false impression that the election had been unfair. As Romney said, the solution was to tell the truth. Instead, Hawley tried to take advantage of the situation to get more visibility and publicity, and to get the Trump vote when he ran for president.

Instead, he’s being pilloried. The AP has now run a story headlined “‘Great damage’: Republicans recoil from Missouri Sen. Hawley.” Former three term MO Senator John Danforth, his mentor and someone who had promoted his career, has been quoted in multiple sources as saying that supporting Josh Hawley’s career was the biggest mistake of his life.

As an aside, John Danforth is a senator from a different era. Already in 2000, he was not willing to join Bush’s legal team in fighting to win Florida, arguing that it was unseemly and unlikely to succeed. And on Nov. 18, he wrote in an op-ed in the St Louis Post-Dispatch that Trump’s attempts to delegitimize Biden’s victory was not conservative but radical. And just on Jan. 4th, he wrote an op-ed in the NY Times along with three other former senators calling for a return to civility and bipartisanship in the senate. Hawley's behavior was the exact opposite.

Even after the occupation of the Capitol building, Hawley persisted in making his case; his only concession was to decline to make a speech in favor of the motion to decertify the Pennsylvania electors, since he had already spoken in support of the Arizona motion. 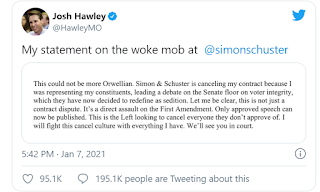 The repercussions keep coming. Simon & Schuster has cancelled the contract for the publication of his book criticizing big tech. Predictably, he makes himself the victim and claims it is a violation of his First Amendment rights. Though I’m not a lawyer and he is, he should know that the First Amendment prevents government censorship; it does not require publishers to publish anything. One of his biggest Missouri donors, David Humphreys, disowned him and called him a “political opportunist,” and has been quoted as saying “Hawley’s irresponsible, inflammatory, and dangerous tactics have incited violence and further discord across America.”  He is being shunned.

In addition to the occupation, one more thing changed that undermined Hawley’s calculation. With the loss of both run-off senate races in Georgia, it became clear that Trump was not helping Republicans get elected. People started to blame Trump for the Georgia defeats and distancing themselves from him, and the insurrection in the Capitol added to the sense that Trump is a spent force. Hawley missed his cue and continued holding on to Trump.

David Von Drehle, in what now looks like a prescient commentary published Jan. 5th, notes that Hawley’s elite background makes him an unlikely successor to Trump, and that Trump voters are not likely to follow him anyway, though they may enjoy the show he creates as a highly educated elite trying to sidle up to Trump. Trump himself used and spit out all those who tried to use him to advance their careers, from Jeff Sessions to all the other presidential primary candidates who hoped to inherit Trump’s followers and thus held their tongue only to be mocked as “Lyi’n Ted Cruz” and “Li’l Marco Rubio.”

It is not clear what the future is for Josh Hawley. His career certainly seems in tatters now. It is not likely he will have to resign, and I doubt a Republican could win a primary against him in four years when he is up for re-election, but certainly his plans to run for president in 2024 are over. But it is still a bit sad to see someone take their shot and fail so spectacularly. Except that his shot was so cynical and undemocratic that the result is probably what he deserved.