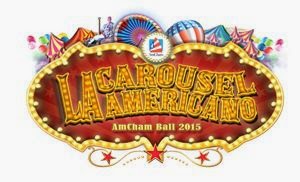 This year's American Chamber of Commerce Ball (a charity fundraising event) has the theme "La Carousel Amercano." There is something about this "name" that I find annoying, even offensive. I do not insist that "Mexico" should be pronounced in Spanish, as "MEH-hee-ko," but this is too much.

First of all, what language is this supposed to be? At first I thought it might be French, but carousel is spelled "carrousel" in French. Plus, it is "le carrousel" no "la." But of course, "Americano" is not French (that would be américain), so perhaps it is Italian? (no: il carosello) Or Spanish? (no: el carrusel). Even if it is a fake Romance language, the article should agree with the adjective (i.e. la ... americana or le ... americano). There are so many mistakes in these three words that they almost had to do it be design!

So when is it OK to just be creative, hybridize and do some bricolage? Maybe if no one knows better, it does not matter. But anyone with even just a first year level of any Romance language should be annoyed by this mixing. It does not come off as creative, but as a sign of ignorance, even a lack of respect for other cultures.  English speakers laugh at others when they make mistakes in translations (see here, and here and here). I admit some mistakes are very funny, but I laugh uncomfortably because they are mostly in attempts by foreigners to communicate using what to them is a foreign language, and we should respect that and give them some slack. But this theme is just an attempt to be, what, exotic? "European"?  Why not get a proper translation? Even Google translate would not make this gross mistake.

I can predict many people to whom I will mention this "translation fail" will accuse me of being too much of a purist. But no one likes to see their language teased like this. And it makes Americans look bad to all who do know Romance languages. And if you say it is no big deal, you are saying it is OK to show your ignorance.
Posted by JB at 1:05 PM

When you come to a Chinese restaurant and got shocked by an "English menu" recommending you to order a "Urinate beef boll rice noodles" or "Germany Sexual Harassment", you will see how far the machine translation could go wrong.

Checkout a huge list of 140 photos (https://www.actranslation.com/knowledge/fun/hilarious-translations.htm) for this sort of hilarious translation fails that you could encounter in China and enjoy some good laughter! I had a few joyful days after finding this. :-)