Hate and the Vice President

Yesterday, I joined several hundred volunteers at a Jewish cemetery, the Chesed Shel Emeth Cemetery, in University City, for a clean-up. Over the previous weekend, 154 tombstones were knocked over in an act of vandalism that may have been anti-Semitic (see video of the damage here). 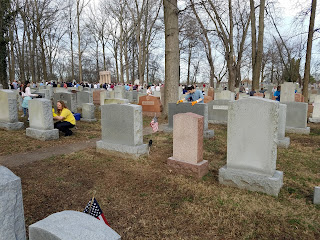 I now live in University City, and with all the hate going around, I decided to go to help and to make a political statement against prejudice and hate. Police do not know who did the vandalism. While usually anti-Semitic violence is accompanied by painted swastikas and other obvious messages, there was no such symbolic message other than the overturned tombstones. It could be just the work of mischievous youths, but the large number of vandalized tombstones suggests it might be a hate crime. Police are still investigating.

The cleanup was organized for Wednesday afternoon, and the new state governor, Eric Greitens, was scheduled to speak at 3:00 pm. Greitens himself is Jewish, and it is important for leaders to speak out against such vandalism and hatred.

Anticipating a crowd, I arrived early, at 2:30, and was surprised by the heavy police presence. Then I was surprised that we had to go through security screening. While in line, some started to speculate that Vice-President Mike Pence might be attending, since he was already in St Louis for another event. When I saw that we were being screened by a Secret Service agent, I suspected that might be correct. And when we saw over a dozen police cars arriving, we knew that was likely the case. The Secret Service agent made us remove all our metal from our pockets, and then checked us with a metal detector. Once passed security, we were given a colored sticker: I was in the yellow group, assigned to clean up a drive and clip a hedge at the south end of the cemetery. 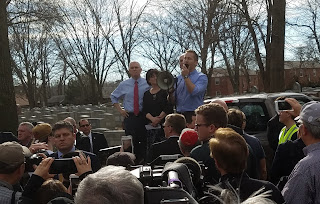 Pence and Greitens came from a side entrance; they came to the center of the cemetery and stood on the back of a pickup truck and made some brief comments. (See local newspaper story here) Greitens said that the vandals do not represent Missouri, but that we, the volunteers, did. He also said that he had spoken to President Trump that morning and that he had been told by Trump to thank us for fighting anti-Semitism. Pence also said that the volunteers represent what is good about America. Both were brief and made appropriate and good comments.

The NPR radio report said that Greitens and Pence joined the cleanup and the interfaith ceremony afterwards, but they did not (the longer online article was accurate, so this was no doubt an editing error)[Correction: they did use a rake for a few minutes for a photo op]. They left after about 15 minutes. But I do not begrudge them that; they have more important things to do, and it was already good that they came to emphasize opposition to anti-Semitism and hate.

But I can’t help but feel like Pence was largely whitewashing the Trump administration’s responsibility for the rise in hate. Just last Thursday, Trump refused to answer a question about anti-Semitism from a Jewish reporter, telling him rudely to sit down (see NY Times story here). Two days ago, an article in Slate.com referred to Trump's "disturbing dalliance with anti-Semitic rhetoric". Trump is largely responsible for the rising climate of intolerance and bigotry that is returning to the country.

The St Louis Post Dispatch article said Pence and Greitens received “resounding applause” at many points, but that was not my impression. I thought it was clear the response was muted, and only a few people were very loud in cheering when Pence introduced himself saying, “I’m Mike Pence, and I’m the Vice President of the United States.” Of course, we were in a cemetery, and it was a somber occasion, so it was not the kind of place where you would cheer loudly. Still, I don’t think most in the crowd were strong Trump fans. And while most people were no doubt happy that leaders were taking this attack seriously, many must have also thought, as I did, that it was a bit late to condemn such violence. After all, Trump stoked white resentment and never spoke up against the KKK and other hate groups. So it is a bit disingenuous now to be surprised and saddened by what he has sown. 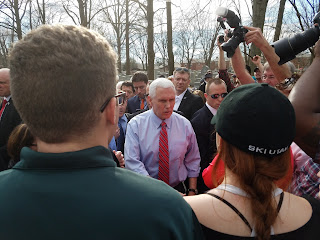 As he left, Pence shook hands with many in attendance. He walked right by me, and shook the hand of one of the friends I was with. But I stepped back, as did another friend. I could not bring myself to try to shake his hand. Power attracts, but I felt I would be a hypocrite if I shook hands with this politician who was responsible for anti-LGBTQ laws in Indiana, as well as reactionary economic policies. I’m told Pence is a good person, but I profoundly disagree with him on many issues. While I was glad he finally spoke out against hate, and relieved that this was finally something all could agree on, I still found his administration partly responsible for the environment that makes such hate and vandalism more likely. Maybe I’m just adding to the polarization of the country. But just maybe, sometimes, we have to make moral statements.
Posted by JB at 9:33 AM