Safety and Security in America, and our new house

We moved into our new house in early December. It is an old house, built in 1909, but well maintained. It is in a neighborhood known as Parkview, which was developed between 1907 and about 1920. There are 255 homes in the neighborhood, and each house had its own architect so is quite different from there others--quite a contrast from new neighborhoods today, where typically homes look similar with minor variations.

In the month before we moved in, two crimes occurred in the neighborhood. In one case, a woman returning home from work at 6:30 pm (in the dark) got out of her car to move a recycling bin and a man with a gun forced her to hand over her car keys. He drove off, picking up two accomplices down the street. In another case, two men in hoodies cut the electricity to a house and attempted to break in, but ran away when the residents raised the alarm. These two incidents worried many residents, because though no one was hurt, they were violent and potentially life-threatening.

In mid December, the neighborhood held a security meeting. Eighty-one residents and ten of the twelve association representatives attended. Police officers said they did not want to downplay the crimes, but reminded residents that the neighborhood is actually among the safest in the county. They also informed us that suspects had been arrested in both crimes.

Our house is large, and old, so it makes sounds. The heat is provided by radiators, and the pipes sometimes make a bang as they expand and contract. My wife's company provides, as an employment benefit, a burglar alarm system, which was installed the very first work day after we closed on (i.e. owned) the house. Every window and door has a sensor, so if someone were to force open the door or window, an alarm would go off, and the police would be called. There are also motion detectors (for when we are away), and breaking glass detectors (in case burglars break a window to get in, but do not actually "open" it). We've been using the alarm, especially at night when we are asleep upstairs, and I have to admit that though I'm not very worried about crime, it does feel reassuring to have the alarm on.

On the 4th night we were in the house, the alarm went off at 1:53 am. In addition to a blaring siren, a voice announced "Second floor first bedroom left window open". I groggily went to check the window, but there was no sign of any forced entry. At the same time, we received a phone call from the alarm company. I answered the phone and sleepily told the voice that it was a false alarm. He responded, "Uhh...." Then I remembered, I had to tell him the secret password, to confirm that it really was all OK, and that they did not need to send the police.  The alarm company came a few days later to change the sensor on that window, because they suspected it was defective.

Since then, we've  had no problems, and use it every evening and when we are away. I sometimes even turn it on when I'm in my office up on the 3rd floor, since I cannot hear sounds downstairs very well. When we had family members visiting over Christmas, we did not always turn it on, especially because they had dogs, and I did not want them to accidentally trip the alarm in the morning when they let the dogs out to do their business. I had no trouble sleeping, even though the alarm was off. But the first night all our guests were away, and we used the alarm again, I heard the sounds of the old house, and had to remind myself the alarm was on. It seems that having other people around calmed me, and made me less worried. As the title of the book by Zborowsky and Herzog (about the Jewish shtetl) has it, "Life is with people."

Apparently, there is a long running debate in the neighborhood about whether to seal it off to "outsiders." Some residents want to limit access to the neighborhood, to make it like a gated community, so as to make it safer. Others believe it is safer if there are more people around.

St Louis has a system of street gates that I have never seen anywhere else (though I have not really studied this, so perhaps it is not that rare). Many neighborhoods put gates across streets to prevent people from driving through them. The gates are always locked. Parkview, my neighborhood, can only be entered by car from one of four sides, the east. Google maps is actually still not correct on this, showing a Westgate entrance as still open. Parkview is a bit different because the streets are actually not city streets, but belong to the neighborhood association (we have to pay to pave and clean them, too). That is why there are no google street views of our neighborhood. We are actually more like a gated community, in that we control our streets and there is one gated car exit on the west side for which only residents have the gate opener. But even city streets are sometimes gated (and always shut). The gates prevent people from using the residential streets as shortcuts, so the streets are safer for children. But the assumption is also that robbers will be less likely to come because it is harder for them to get in and out--at least by car! As you can see in the picture above, the sidewalk is not gated for pedestrians.

My neighborhood, however, has gates with locks (operated by number codes) to keep outsiders from entering the neighborhood. This is because the neighborhood is next to the Delmar Loop, a street with many restaurants and funky shops. (Among our new favorites are Indian and Middle Eastern restaurants, and a pub called "The Three Kings", a reference to Henry VIII, King Kong, and Elvis). The neighborhood is great because it is so close to these businesses, but "we" don't want drunken students to wander through our streets, hence the locked pedestrian gates. I'm told that not everyone agrees to these gates being locked, and in fact, there are three other paths into the neighborhood that are not locked. Two of them are are not well marked (see blue arrow on map). That is the compromise: open, but not off of Delmar Avenue where the bars are.
At the security meeting, there was disagreement about whether to install more street lights. Some believe it will make the neighborhood safer; others point out that they are expensive ($10K each!), and that the big trees in the neighborhood block much of the light anyway. One person said she liked the neighborhood as it was and did not want it to be lit up like a used car lot. Everyone was very polite, but it is clear that with so many opinions (and professors, lawyers and doctors used to expressing their opinions and used to being heard), it is going to be hard to agree on many changes. 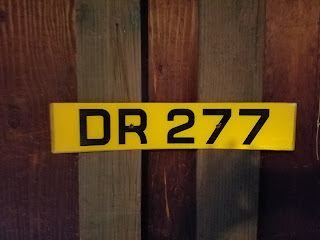 As we get used to the neighborhood, and our house, we are feeling more secure and safe. We hang up our paintings, decorate with our things, and gradually make the house our own. The ghosts of previous owners gradually recede to the shadows, where they belong. We are only the fifth owners of our house, but we are very aware of the previous owners when we wonder why that light switch is located there, and why there is that crack in the stained glass window (what happened to crack it?). There is a common tradition in the US (I think) of hanging up old license plates, so I've hung up my old Hong Kong license plate in my garage: a small reminder of my old home in my new (old) home, and a small talisman to shoo away the ghosts of owners past, and make our new house our home, and make it safe.