Are Paved Roads "Unnecessary Government Spending"? What is Government in a Democracy? 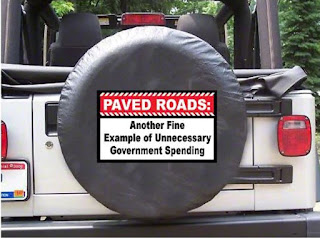 Yesterday we went out into the countryside to visit a friend who lives on a farm. It was a beautiful sunny day, and the leaves are just starting to turn colors. On the drive back home, we saw a Jeep Wrangler (a large 4 by 4) with a spare wheel cover like on the right. It says, "PAVED ROADS: Another Fine Example of Unnecessary Government Spending."

This struck me as peculiarly American. Of course, I understand that this is partly in jest; the website where this spare wheel cover is sold sells other humorous tire covers (see below) and notes that with this cover you can "and enjoy the stares when the guys behind you read it." (I'm actually not sure how you're supposed to see the faces of people behind you without crashing into the people in front of you, but that's another issue.) 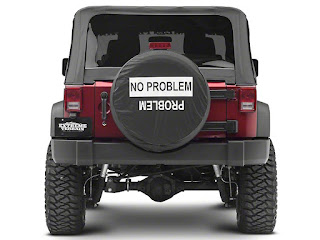 The website where this is sold is called Extreme Terrain Off-Road Outfitters, and they have a smaller sticker for $5, about which they say: "Does your rig rarely see the road? Happier on the trail? Government annoy you? (You're not alone!) Get a few grins with this decal."  So they think it is funny. But at the same time, it is not. It is serious political propaganda.

The notion that the government is an oppressor is not new in the US, and it goes back to the 1776 Revolution, as exemplified by the famous Gadsden Flag with the coiled snake and the words "Don't Tread On Me" and the anti-tax Whiskey Rebellion of 1794. Anthropologists also view states as fundamentally oppressive and exploitative institutions. Most people view the rise of states as the beginning of "civilization," but in fact, they are just created when a minority (a priesthood, an oligopoly, a nobility, elites, etc.) take control, organize armies and food deliveries, and maintain their superior power, usually through some sort of force (think military, or police, or praetorian guard). Since the first state, leaders have controlled the state to their own advantage. They may claim they need to do so to organize production or for defense, but the fact is the leaders of states have benefited at the expense of the majority of people (the peons).

But it seems a bit Luddite to believe that we can live, in our current world, "independently," "free" of any government constraint. That Jeep Wrangler was, after all, driving on I-64, a 6-lane interstate paid for by the federal and state governments. We would not be able to travel 30 miles to have lunch with friends if we did not have paved roads--which are paid for by the government!

The genius of American politics in the past was the combination of a belief in small government, to avoid bureaucracy and high taxes, along with the belief that science and technical progress supported by the government could solve human and social problems. From the battles between the two approaches, or rather, compromises between the two, progress could be made. But in the past few decades, a Libertarian ethos has arisen that holds that all government programs are evil: they waste money, undermine people's freedom, and don't work to boot. The fact is, this is sometimes true, but not always. The trick is to know when to use government programs, and when they do not work. The assumption that all government programs are bad is an ideological position promoted by a few super-wealthy Americans like the Kochs and Mercers, and it has grown in influence over recent decades.

Now the US electorate is again debating healthcare: progressive Democrats are proposing "Medicare for All." How this will be funded is not clear, and this is making many centrist voters nervous, especially those who have good health insurance and who worry that it will be taken away and that they will be forced to go into a bureaucratic government-funded health system. And yet, it is incredible that there are still millions of Americans who have no health insurance.

Two days ago, I went to a "Gala" (a fundraiser) for a local charity called "Gateway to Hope." They support low-income women who have cancer by helping them maintain their insurance payments, or helping them pay their mortgage and food bills, so they can concentrate on their treatment. Fact: 36% of women with breast cancer cannot work. If they lose their job, they can lose their insurance! It is shocking that people who get cancer risk losing their job and their house, or that they have to scrimp on food while they are trying to recover from chemotherapy. So it is shocking that such a charity is actually necessary, in one of the richest countries in the world. Why does this charity have to solicit from private donors? Everyone should be contributing, through their taxes, to spread the burden evenly. One would think that everyone would receive this kind of support as a matter of course, but that is not the case.

Hong Kong has also long been governed by the principle of limited government, but Hong Kong has a good public health care system that is very inexpensive to the patient. It is true that there are long waits for some specialties (especially for psychiatric care--suicidal patients have to wait many months to see a psychiatrist), but patients with money can pay out of pocket or buy insurance to get private treatment. Emergency treatment is available to all; the registration fee is HK$100 (US$13). Hong Kong also has many NGOs providing social services, but their funding does not totally come from private sources; many receive all or nearly all their funds from the government. The government audits them and makes sure the money is well spent, but the services are provided in a less bureaucratic form by NGOs. Even many private schools in Hong Kong get significant portions of their funds from the government.

I find that when people in Taiwan, China and even Hong Kong find that there is something wrong in society, they expect the government to step in and address the problem. That is not true for many Americans; Reagan famously said that the nine most terrifying words are "I'm from the government and I'm here to help." The odd thing is that in a democracy, "the government" should be "we, the people." It is a sign of how much more democratization we need in America that people still see the government as an oppressor, even though they supposedly elect it every election.

So a wheel cover claiming that public roads are a waste of taxpayers' money is not funny. I wish it was, that we could agree that it was absurd. But as long as extreme individualist libertarians proclaim their notions of very limited government, it is not a joke but an example of an anti-social and selfish ideology.
Posted by JB at 1:25 PM

I am amused at how you completely and thoroughly missed the point of this bumper sticker. You wrote hundreds of words and digressed into historical, political and anthropological analysis of a...joke.

The point of the sticker is that a Jeep, the king of four wheel drive vehicles, can drive over nearly any type of terrain, no paved roads required.

The point is not about oppressive governments, the point is about automotive engineering.

How is the weather up there in that ivory tower?

I'm sorry if you do not understand that the joke (I specifically said it was "partly in jest") has political and cultural meaning. It is naive of you to think it is just about automotive engineering; go look at the website that sells the sticker, and you'll see other related political messages.-JB