The Benefits of Life in a Smaller City

One of the advantages of living in St Louis is that I can attend events that would be crowded or not accessible to me in larger cities. St Louis is not small; the metropolitan area has 2.8 million residents and ranks 21st in the nation (it fell below 20th for the first time in 2017 because the population is not growing here, while it is growing in the south). So St Louis has more events than I could possible attend. And this week, I discovered a subculture that is interesting as a cosmopolitan competition and network of fans.

Two days ago, I attended the St Louis Rapid & Blitz chess tournament. Chess has its own subculture, about which I knew next to nothing. By coincidence, I had just heard about blitz chess for the first time in a great podcast by Malcolm Gladwell, and when I heard there would be a tournament in St Louis, I thought I would go to check it out. In blitz chess, players each have a total of 5 minutes to make all their moves, so they have to decide quickly. I thought that for a non-chess expert like me, this would be more interesting than watching players ponder their next move, as in regular chess. I went on day 4 of the 5-day competition, the first day of blitz (the previous days had been “rapid”, which allows 15 minutes per side).

It was only $10 to attend, and to my astonishment, there were only about a dozen spectators. There are 10 players in the competition, and they play a game every half hour. The setting is the St Louis Chess Club, which is not a large building, really just a pair of townhouses, connected in the middle. On the 1st or ground floor, they had set up three rows of seats with a TV, showing the television commentary covering the tournament. The competition was on the 2nd floor, to which I was admitted only upon surrendering my phone and watch (I was told it was to prevent noise, though people with SLR cameras were clicking away during matches). Tables are lined up on one side and a belt separates them from the area for spectators. I was 5 meters from the players. 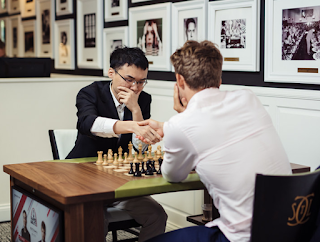 I decided to watch the Chinese players (since I had no other logic to follow). I noticed that both Yu and Ding were among the first to sit down at their positions for their match. As in sports, the players shake hands (perfunctorily, I may add) when the second player arrives, and again at the end of the match. Players are given a one minute warning, then a voice calls out (with no microphone) that play is to begin. Play goes very quickly for the first 10 or so moves; they obviously have certain opening moves they all know, so it is only later that play slows down. Then at the end, play can be frantic, as each tries to avoid losing by running out of time. In fact, the timer adds 3 seconds to each player’s clock each time they push down on the timer indicating the end of their turn, so if they move quickly (almost impulsively), they should actually never run out of time, but of course that is when mistakes are made.

My ignorance of chess is great, and I have no idea why these 10 players were invited, and why the American Hikaru Nakamura, last year's winner, was not present, for example. But in addition to the issues of the organization of the tournament and tour, it was impressive, while watching on TV on the 1st floor, to hear the commentators analyze each move. At one point, world #1 Magnus Carlsen made a mistake, failing to see a move that would have led to a victory. The commentators said that those watching at home (I guess some cable companies carry this channel) should gain confidence from seeing that even someone of Magnus' caliber could make such a dumb mistake.

The technology supporting the tournament was amazing. Each table had cameras focused on the board and players. The timers, I later realized, were connected to the TV feed, so time remaining was displayed on the TV too. The commentators had various computer programs that allowed them to review the players’ moves and to draw arrows to show potential moves. For someone who knows chess well, it must be thrilling. I was just amazed at the rapid discussion of Qe4 and pawn h5, which I understood literally but knew I did not understand the full meaning.

In all of the three games I saw finish, I was not entirely sure what had happened because they ended so suddenly. One player reached out and shook hands with his opponent, but I could not be sure if he had lost or tied. The problem for me was that the players, and all chess experts, know various endings, so they already know how the game is going to end after a certain point. But I have no clue. You can see the last minute and a half of an ending here (or in the box below, and jump to the 1:57:50 point in the video) and if you turn down the sound, you may experience the confusion I felt. With the sound up, you can hear the excitement of the experts.

Despite all the technology and internationalism of players from 8 different countries, it is a bit disappointing to see that in much of the promotional and television material, they confused the surname and given name of the Chinese players. You can see this in the banners on the 2nd floor of the Chess Club (right), and on the screens on TV (see screenshot above). The surnames of the Chinese players are Ding and Yu, not Liren and Yangyi. In fact, it is actually quite easy to identify Chinese surnames, as 99% of surnames are one syllable long. (Some given names are also one syllable, but that is another matter). Plus, his Wiki page notes "This is a Chinese name; the family name is Yu." It is a bit surprising that this was not caught and corrected. And I assume the Chinese were too polite to point out the error.

St. Louis has actually become the major center for chess in the United States, and the reason for this, as for many things, is money. Rex Sinquefield [pronounced sink-field] is the donor who funds the World Chess Hall of Fame, the St Louis Chess Club, and the two annual competitions in St Louis on the Grand Chess Tour, which are called the STL Rapid & Blitz and the Sinquefield Cup. The World Chess Hall of Fame last year celebrated its 10th anniversary by holding an exhibition and releasing a publication that looks like a newspaper entitled The Sinquefield Effect.

Rex Sinquefield is an interesting character. While still a student, he became a believer in the “efficient market” theory, which says that it is very difficult if not impossible for investors to do better than the market. He acted on these ideas and made a fortune in Chicago as an early creator and manager of index funds. Index funds do not pick stocks; they invest in stocks to match an index, like the S&P500, which reflects the 500 largest publicly traded companies in the US, or a fund that mimics the Consumer Staples component of the market. Research shows between 64 and even over 70% of mutual funds do not beat their sector’s index (depending on the sector). Since the cost of running an index fund is so low (no research), they always do better than most stock-picking mutual fund.

Sinquefield has said he got bored with his index fund work when he was 61 (and a billionaire), and moved back to his hometown of St Louis in 2005 to make a difference. He is politically very conservative, and gives money to politicians and organizations to try to lower taxes, believing that will help spur economic "growth". He particularly despises St Louis City’s 1% income tax, and even has promoted the total repeal of the state income tax. He has created the “Show Me Institute” (website here, or see pithy Wiki summary here) (Missouri is known as the “Show Me State”) as a think tank to promote his conservative, libertarian, and free market ideology.

Sinquefield was widely believed to be the éminence grise behind a push to combine St Louis City with St Louis County. The county has over 80 different cities and villages and towns, most with their own police and fire department and other services. The duplication of services and inefficiency of the system is obvious to all, but the status quo also protects rich towns from having to contribute to the costs of poverty alleviation, and makes their public schools well-funded, while poorer towns have underfunded and struggling schools. These inequalities are huge, and difficult to tackle, and in fact the proposed merger was not really going to address them directly, but might have started the process. He funded a group, Better Together, that submitted a proposal and held town hall meetings to try to gain support. But as it happened, the St Louis County executive, Steve Stenger, who was to have become the executive/mayor of the combined county-city, was arrested and has now been sentenced to 46 months in prison for corruption, so the push for county-city merger has died, again. The issue seems to come in 10 year intervals.

Sinquefield has bragged, “If you get involved at the locallevel, you will be amazed at how much influence you can have.” I do not have millions of dollars to influence local politics, but I was able to see a major world chess tournament, and rub shoulders with Grand Masters like Magnus Carlsen, Fabiano Caruana, YU Yangyi and DING Liren (or, should I write, Yangyi Yu and Liren Ding?), in a way that would not be possible in big cities like Hong Kong or New York, where there would be hundreds if not thousands of fans and spectators. The prize money is not like some sports (hm, is chess a sport? That was a topic for week one of my Sports and Culture course) but is not insignificant. St Louis is the capital of chess in the US today.