Observations on the Hong Kong Protests in Early December

I was in Hong Kong for ten days at the end of November and early December, and though I had been following the protests fairly closely from afar, there were several things that struck me once I was there. I arrived the morning after the election, and since I had no idea how the election would turn out (Would a “silent majority” turn out to support the government? Had protester violence alienated the public?), I quickly checked the results on my phone as the airplane taxied to the exit. I was surprised to see how strongly the pro-democracy candidates had won. It was an unprecedented repudiation of the pro-establishment parties and the government, and of Beijing. There could be no doubt that the protesters represented the anger and frustration of a large segment of the public.

I should mention that many in the US seemed worried for me, but this was ridiculous. The protests are usually announced in advance, and are very localized. Most people go on living their life. Images on TV focus on the "action" but that occurs in small pockets, and it is fairly easy to avoid the protests. There can be traffic jams caused by protests, and the MTR did close early for a while. But Hong Kong's protests are not a civil war. I was not worried for my safety in going on this visit. I just hoped the wedding I was planning to attend would not have to be canceled because of protests. But everything went well. There was in fact a lull in the protests following the election. The odd thing, actually, was the lack of response from the government or Beijing.

There are many reasons for the high level of anger and frustration in Hong Kong, and it is wrong to try to identify the single or primary cause. Thus, the government’s strategy (pushed by Beijing) of focusing on economic and livelihood issues is not likely to resolve the protests. There can be no doubt that the high cost of housing, rising inequality, and limited prospects for many young people are contributing factors, but they are not the “material base” on which all other elements rest, to use Marxist theory. There are identity issues, and ideas of justice, that are harder to address. And we have to be frank that a layer of anti-Mainlander bigotry also adds emotional power for some of the protesters.

Another explanation that Beijing has for the protests, aside from economic issues, is “foreign interference.” The assumption that foreign “black hands” are behind the protests might seem plausible from afar, and the CIA has certainly promoted and organized protests and coups in the past (Iran 1953, Guatemala 1954, Bay of Pigs 1961, etc.). But it surely is an exaggeration of American power to think the CIA can mobilize the thousands of protesters who have repeatedly come out on the streets to protest. It is, of course, also an insult to them, assuming they are being manipulated. But this belief in “black hands” is probably not insincere; communists believe in organizing protests, and it is hard for them to believe that people would spontaneously and of their own individual will come out to protest. Pro-Beijing protests on campuses overseas, and the flag-waving crowds greeting Chinese leaders at various venues in China and overseas, are all organized by the party, so it is only natural, in their minds, that protesters against the Party must also be organized but some secretive forces.

Instead, what I heard from many people I spoke to was how ordinary people felt compelled to donate supplies (masks, umbrellas, clothes, etc) to support the protesters. People leave change and single-trip MTR cards on subway vending machines to help protesters leave without leaving a trace on their Octopus cards that would record their travel. People with cars have driven protesters away from police action. I suppose it would be naïve to think foreign agencies are not supporting the protests, but that is hardly an explanation for what is going on.

The degree to which ordinary members of the public are involved is striking. Several friends commented with awe and surprise that on the Monday when a general transportation strike occurred (Nov. 11), and buses were stuck for hours on Nathan Road, passengers who got out to walk were not angry, but said things like “Yes, this is inconvenient for me, but I understand why the protesters need to do this.” This was surprising because during the Umbrella Movement in 2014, much of the public complained about the inconvenience caused by the protests.

A sociologist in Hong Kong who studies protest movements made two interesting observations. He noted that the protests may seem to have erupted suddenly from nowhere, but there are protesters who have over a decade of experience in battling the police. From battles over Queen’s Pier, the Kwu Tong redevelopment  and the high speed train station, protesters and police have years of experience in fighting with each other (my retired police office friends refer to them as “professional protesters”). Indeed, at the outbreak of the Umbrella Movement, the very first day when tear gas was first used (to the shock of Hong Kong society not used to such methods), we saw protesters with defensive equipment from masks to plastic wrap arrive prepared for battle. So these tensions have been simmering for years. Each side has learned from the other, and escalated in their tactics, but their attacks also have a ritualized quality.

Another surprising aspect of the protest is how deep the frustration of the protesters is. Many are willing to tear down all of Hong Kong if their demands are not met. One of the slogans spray-painted on walls and on the streets says “If we burn, you burn with us” (a famous line from The Hunger Games). The common Cantonese expression is 攬炒 lam chau (or in Jyutping romanization, laam5 caau2)  See article on the term here. Lam literally means to grasp or to pull something into one’s arms; chau means to stir fry, and by extension to speculate (e.g. in stocks), as well as to fire (sack) someone. But here the expression means to go down together, taken from a poker strategy. This nihilistic attitude of course alarms many people. The circle with a letter V on it, from “V for Vendetta,” is a common graffiti around Hong Kong, expressing the anarchistic idea that a chaotic interim period is necessary before a functioning society can emerge. 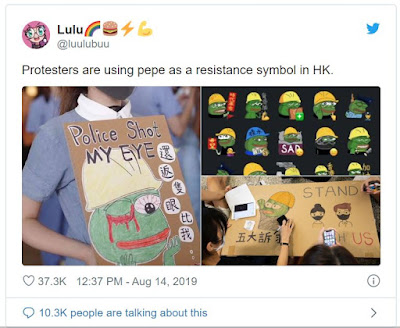 Protesters use many leftist quotes from Mao and from the communist party, but also anti-globalization ideas from the far right. The Hong Kong protesters mimic a segment of Trump supporters in the US, but the idea many protesters have that they have to “blow it all up” is similar to the “drain the swamp” and anti-establishment ideas of many Trump supporters. Thus, while it may seem odd that pro-democracy protesters in Hong Kong have Pepe the Frog dolls and masks (see "Know-your-Meme" that does not see the meaning here and NY Times article here), these protesters identify with the anti-establishment ethos that the Alt-Right has created for the frog (much to the dismay of the frog’s creator; see a Reply All podcast and transcript here). The protesters do not see Pepe as a symbol of hate, but they correctly identify it as a symbol of protest, and some of the anti-Mainlander bigotry (as noted in the excellent This American Life episode) also fits with the Alt-Right's use of Pepe as a symbol of hate. So, many pro-establishment people are probably right when they say that Americans and Europeans would not be so sympathetic to the protesters if they were protesting like this in their countries.

On the other hand, a European friend in Hong Kong said that only now, with the protests, does Hong Kong feel like home. Before, with everyone worrying about making money and about brand-name clothes, she felt alienated from Hong Kong society, but now that people are political in a way that she understands and recognizes from her youth back home, she feels much more of a connection and bond with Hong Kong. She cares much more about the society now that she knows others care about society’s future too.

But most people are more negative. One friend has begun the process of emigrating to Malaysia (which for a Chinese person seems, at least superficially, to be like "out of the frying pan into the fire"). Several other recently retired friends who are strongly anti-protester are now planning on moving to England, though they had planned to remain in Hong Kong. They say they do not recognize their city any more.

It is not clear how things will end. The protesters are unorganized by design, to prevent the government from arresting the leadership like they did vindictively several years after Umbrella Movement had ended. It is hard to imagine Beijing yielding on direct elections of the Chief Executive. Indeed, all pro-Beijing figures keep talking about how Hong Kong people need to be educated to be more patriotic, which, of course, is precisely the attitude that mobilizes people to go out on the street in the first place. Even the protesters’ demand of an independent commission to investigate police violence seems impossible, because the government is simply hiding behind the police. If the government were to announce an independent commission, the police would feel they were being thrown under the bus and would refuse to prop up the government. It seems clear that it is not in the interest of Beijing to send in the PLA. It is also not clear what the PLA could do to quell the protests that the police has not tried, short of shooting hundreds of people, which would have huge international repercussions. It is said that some protesters are hoping to provoke just such a response by Beijing to put more pressure on the authorities. Most people see this as a mad fantasy.

It seems the government intends to simply wait out the protesters, hoping they will tire. In the meantime, the reputation of the police, until recently touted as “Asia’s finest,” is in tatters. Stories of summary arrests and beatings by police, even of innocent bystanders, are common. And a surprising number of people believe that the police has killed protesters at the Prince Edward MTR station and disposed of the bodies. Rumors about the toxic chemicals in the tear gas and blue dye shot from the water cannon are rife. There is no trust in the government. The government claims to have foiled two recent bomb plots. Such an escalation would be tragic, and probably self-defeating. But it is hard to predict anything about these protests, given how unpredictable they have been thus far.
Posted by JB at 1:46 PM

Thanks, Jo. This helps me feel as if I understand the situation a bit better. Best to you and yours in the New Year,
Rich Horwitz