On Saturday July 3rd, we went to the St Louis "America's Birthday Parade." Parades are common across cultures, and often they are a way for a community to emphasize and build up its identity. Americans have been celebrating Independence Day with parades since shortly after the Revolutionary War. But nowadays, parades do not attract the same crowds as in the past. This year's parade certainly was affected by Covid-19, though no one there was wearing a mask, even though there were plenty of children too young to be vaccinated. I suppose the people who are cautious enough to wear a mask did not attend. The St Patrick's Day parade in March had been cancelled because of Covid, so the Irish community brought their giant inflatable leprechaun out for Independence Day.

I was struck by how similar parades are cross-culturally. Each "troupe," be it a band or a float or a balloon, was preceded by a banner that named the group in the procession. A decade ago, I saw a neo-Medieval procession to a palio-like horse race in Ferrara, where they also had banners and bands leading each team. Like religious processions in Hong Kong and Taiwan, St Louis had a variety of bands and music, as well as floats, and displays of dancing and athleticism. No shamans in trance in St Louis, but there were athletic young girls doing flips going down the street, and very energetic dancers.

These flag handlers reminded me of the flag acrobats in Italy, though in Italy they throw the flags in the air and catch them (usually) on the way down.

Music and bands are nearly universal in parades. Here the marching bands were mostly high school bands.
Some of the bands are on floats.
And this being America, there are many cars.
One of the more interesting parades in the anthropological literature is a parade that used to be held by the Tang lineage in the New Territories of Hong Kong. The Tangs were the big landowners of the Yuen Long area. They paraded along the boundaries of their territory. Their purpose, from a political point of view, was to show other lineages, and their tenants in outlying villages, how powerful and numerous they were.  I did some brief research in a village that was located next to a small Gun Yam (觀音) temple that belonged to the Tang, a place they would visit annually on their parade. (This is described in a book chapter by James L. Watson entitled "Fighting with operas: processionals, politics, and the spectre of violence in rural Hong Kong.") These parades are a bit like the way dogs mark their territory. And they are also reminiscent of the Unionists' parades celebrating victories over Irish Catholics in Northern Ireland.

Interestingly, the Independence Day Parade in St Louis has a somewhat similar political origin. The current parade began as part of a "Veiled Prophet" parade. The Veiled Prophet Organization was a club for the elite men of St Louis. It was founded in 1878, a year after white and Black workers held a major strike that shook the city. Once the strike was broken, the elite sought to heal the wounds, but on their terms. The Veiled Prophet Organization held a debutante ball and a parade, which essentially expressed who was in charge of the city. People have protested against the Veiled Prophet for years, claiming it was elitist, racist, and sexist (see 1969 article on protests in the St Louis Post Dispatch and a 2014 article in The Atlantic). Just last month, Ellie Kemper (an actress from Missouri) was criticized for having participated in the debutante ball when she was 19 (she was crowned "Queen of Love and Beauty") and she apologized. (Vanity Fair had a good analysis here.) The Veiled Prophet Organization has adapted and changed over the years, and the Veiled Prophet Parade that used to be held at the time of the Ball in October has become a "Fair St Louis" parade over July 4th.

In general, I find that most people who did not grow up in St Louis are shocked at the Veiled Prophet as a cultural institution, but those who grew up here or have lived here a long time take it as normal, simply part of the culture. There is so much that could be said about the Veiled Prophet. Maybe some other day. Right now I want to focus on the "America's Birthday Parade" and on the custom of parades in general (realizing that by doing so, I'm whitewashing the role of the Veiled Prophet in St Louis). 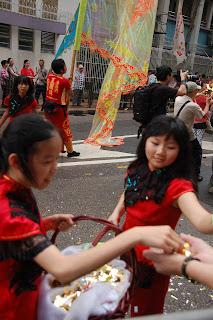 I had never noticed that people hand out candies to children along the parade route, but I saw this in St Louis and then found a picture of the same practice in my files of Hong Kong's Shau Kei Wan parade for Tam Kung. 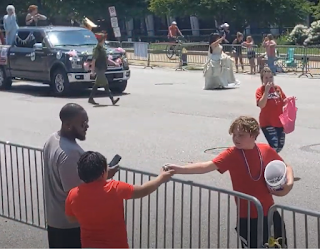 Of course, these similarities between religious and secular processions are not mere coincidences, but are evidence for the theory that nationalism is the "civil religion" of the United States. This is the theory that rituals like Thanksgiving Day, 4th of July parades and fireworks, and the singing of the national anthem and reciting of the Pledge of Allegiance are ways Americans create a common understanding of who they are. These secular rituals are necessary because no one religion unifies the country.
And, furthermore, the similarities also suggest that what we label "religion" is really not a separate domain at all, but is simply one form of symbolic thinking and ritual behavior that all humans engage in. This is a growing argument in the anthropology of religion and in religious studies, which sees the Western definition of religion as culture-bound. Indeed, Chinese did not have a word for "religion" until about 1900, when the neologism zongjiao 宗教 was introduced. Of course, Chinese had all sorts of rituals and ideas (e.g. ancestor worship and the emperor's offerings at the Temple of Heaven) that Westerners called "religious" (actually, they called them "superstitions," but that is another problem), but only in the West, where Papal authority was separate from the "secular" authority of emperors and kings, did a notion of religion develop.
This is a big topic I hope to write about in the future. In the meantime, it helps me understand my local parade as a ritual of integration, and historically as a display of power.
Posted by JB at 11:08 AM