People like to believe the idea that we are all connected by “six degrees of separation.” This is the idea that between me and any other person in the world, there are only five persons, each of whom know each other and have a personal connection, i.e. six links. The research to support that notion is pretty weak; Stanley Milgram’s famous research that popularized the notion actually had at most 30 percent of seeds actually reach the target person; some psychologists even consider “six degrees of separation” an academic urban myth (see Psychology Today article here).

What strikes me about this concept, however, is the separation, not the links. Some people enjoy “connecting,” meeting new people. To me, however, meeting people I will never see again is sad, almost depressing. Maybe I’m an introvert, or maybe it is because my family moved every two or three years until I went to high school, so I lost friends and contacts after every move. I value permanent connections and friendships, not brief encounters. Of course, this is a stupid approach, because you can’t have long friendships if you do not start with the encounters. Plus, nothing in life is permanent; we just have to go with the flow. 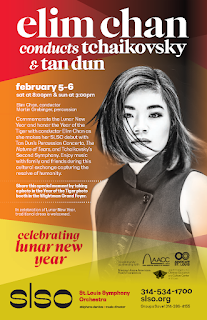 This was brought home to me this weekend when we went to a St Louis Symphony concert celebrating the Lunar New Year. Though we are being very cautious about going out and even about meeting people because my 91-year old mother-in-law is staying with us, we decided that since everyone in the symphony hall would be vaccinated (and mostly older), and everyone would have masks on the entire time, it was relatively safe. We were especially eager to go because the guest conductor was going to be Elim Chan (陳以琳), who in December of 2014, at age 28 and while still a doctoral student at the University of Michigan, won the Donatella Flick LSO Conducting Competition, the first female conductor to win the competition in its history (and one of only 5 females among 225 entrants in this overwhelmingly male occupation) (see NYTimes article here). We had read about her while living in Hong Kong, because she was Hong Kong born and raised, (see SCMP article here [paywall, after intro], for example). So we thought it would be fun to go see her conduct in St. Louis.

Elim Chan’s visit was held in partnership with the St Louis Asian American Chamber of Commerce, and through friends we were invited to meet Elim Chan backstage after the concert. Due to a bit of miscommunication, the person who was to take us backstage did not meet us at our seats after the show, as we expected, and we ended up waiting in the hall while the ushers cleaned up, searching for lost glasses and gloves. All this time we could actually see Elim on stage, deep in discussion with a musician. 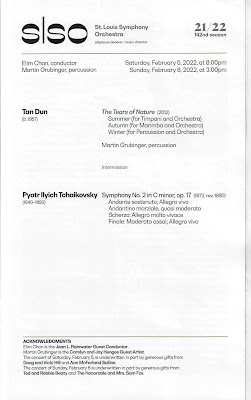 I was ready to abandon the whole thing. To me, what was the point of meeting her briefly, since we will never see her again (or if we do at a concert in, say New York, we certainly will not be able to meet her backstage). My mother-in-law, on the other hand, suggested we just call out to her to get her attention; I’m not sure whether my wife or I were the more mortified.

Finally a kind usher went and found our contact person, who very apologetically came and took us backstage, where we met and chatted with the conductor for five or ten minutes. She was charming and gracious, and said she was happy to be able to speak Cantonese with my mother-in-law.

And it turns out we have some connections. Elim Chan did her final two years of high school at Li Po Chun, which is a branch of the famous United World College located in Ma On Shan, very near the Chinese University of Hong Kong. Our daughter has a good friend, Bettina, who was one year behind Elim at Li Po Chun, and Elim knew Bettina. Bettina’s father was a colleague of mine at CUHK, and we knew him and his wife socially as well.

My mother-in-law asked Elim Chan if she knew Tsung Yeh, currently the director of the Singapore Chinese Orchestra. She said she of course knew about him, and that he was up there, indicating with her hands that she considered him to be in an exalted position. My mother-in-law noted that she was good friends with Tsung and his wife, because he had been conductor of the South Bend Symphony for 28 years before his retirement in 2016. South Bend is her home town. In fact, I also met the conductor many times, and enjoyed a long conversation with him in the O’Hare United Airlines lounge in the early 2000s, where he taught me many interesting things about conducting and we speculated on why his baton, which could really be a lethal weapon, was never confiscated or examined by TSA. He also had consulted with my parents, who were teachers of Italian, on the finer points of Italian pronunciation, so he knew my parents well. 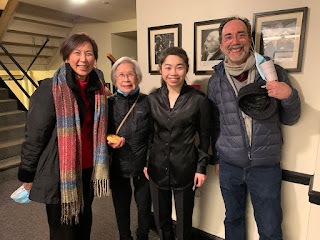 We took pictures before we left; only then did we lower our masks briefly for the photo. And I was glad we had stayed and was really charmed by Elim’s graciousness. She may have had more interesting people to talk to than us, but she did not express that. A few of the departing musicians stopped by and complemented her on how efficient she had been, because it turns out that due to the heavy snowfall on Wednesday and Thursday, they were not able to hold rehearsals on those days as planned.

As we left and walked to our car, I reflected on this brief encounter. Though I very much enjoyed meeting her, I’m sad we’ll probably never meet again. And I thought about Tan Dun. The first piece performed by the symphony was composed by Tan Dun. I actually met him shortly after he arrived in New York. I remember that he was very friendly, and that he was surprised and amused that I spoke Chinese. He lived in an apartment across the street from me, on 113th street, in an apartment that was an “anthropology apartment.” I don’t know how or why, but that apartment had had a series of anthropology grad students living in the apartment over the years; the apartment even had a bow and arrow hanging on the wall, and as I remember it, no one seemed to know who they had belonged to. Ashraf Ghani, later the president of Afghanistan, had lived in that apartment four years earlier, I believe—at least, I met him there, when Ghani was finishing his notoriously lengthy dissertation.

So as pleasant as meeting Elim Chan was, there is also a sadness in it for me. It highlights the impermanence of relationships in the everyday flow of life. Not only is the notion of “six degrees of separation” a myth, but most of the “connections” we make are fleeting and fade away. Such is life.