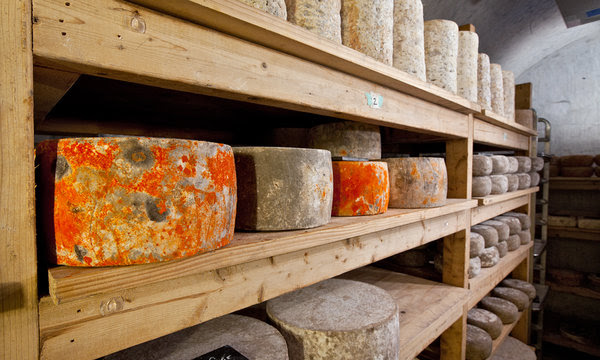 The New York Times has an interesting article about affinage, the art, or voodoo, of aging cheese, depending on your point of view. In the skeptic’s corner:

“This affinage thing is a total crock,” said Mr. Jenkins, the cheese monger at Fairway and the author of the pivotal 1996 book “Cheese Primer.” “All it does is drastically inflate the cost of cheeses that have benefited zero from this faux-alchemical nonsense.”

Mr. Jenkins, a New York retail pioneer, argues that affinage is ultimately about marketplace savvy. Long ago in places like France and Belgium, the affineur first stepped in to extract profits by acting as the middleman.

“It has nothing to do with making cheese taste really good,” he said. “It has to do with getting paid. And it’s morphed into a typical ‘French things are cool’ thing that Americans have bought hook, line and sinker. They all think, ‘I can even turn this into a marketing tool, so people will see how devoted I am to my craft.’ ”

He argues that the cheese will be fine, and that it basically makes itself.

“And if my humidity is 35 percent different from yours, my cheese is going to taste just as good as yours. It may have a different color of mold on it, but it’ll taste just as good. And yours is going to be twice as expensive, and you’re a highway robber. And you’re contributing to the preciousness and folly of Americans trying to emulate something in France that has nothing to do with quality. It has to do with expedience. Are you getting me here?”

In the believer’s corner is Rob Kaufelt, who has owned Murray’s Cheese Shop in Greenwich Village since 1991. He argues that affinage needs to take place close to the point of sale, so he has “caves” in Manhatten. He says that exceptional care is needed throughout the process of cheese making:

This included: buying the cheese straight from the farms, using special temperature-and-humidity-controlled trucks to make sure the cheese travels without spoiling and taking care of “the affinage closer to the point of sale.”

“Most people don’t bother with this at all,” Mr. Kaufelt went on. “Most people are lazy. Most people are not obsessed with quality. The others would rather obfuscate the issue rather than spend a nickel doing what they need to do.” The proof, he wrote, “is in the eating, which I leave to you.”

The New York Times did conduct a double-blind taste test of three cheeses bought at three different stores, at Murray’s, Artisanal and Fairway. The cheese experts strongly rejected the Fairway cheeses. So TLC works on cheese, too, and connoisseurship and affinage are not just fancy French words, or superstition, but do make cheese better after all.  Who knew?!