University as a Business Seeking Patents

Economists are great at finding an economic aspect to almost anything. Gary Becker famously even studied the economic incentives in families. It would be impossible to deny that economic factors do not affect the number of children born in almost any culture, though there are, of course, many other factors at work. But I find the dominance of economism and the creeping of business logic into the university to be quite annoying. There is no doubt that costs and benefits of education need to be considered (students with a humanities degree from third rate schools who cannot find a job and are saddled with tens of thousands of dollars in student loans did not sufficiently consider cost/benefit). But there is a lot more to an education than the cost benefit calculation.

But it is the idea that the university should "make money" that makes me very angry. Universities, whether private (non-profit) or public (subsidized by the state, i.e. the people), should operate for the public good. They should be doing the research that will help society, and will help business and industry but that is too advanced (e.g. theoretical) or expensive for individuals or companies to do on their own. Usually it is fundamental research in the sciences, or it can be public policy research which informs the public. Or it can be research in the arts and humanities that makes life better for those who enjoy and want to understand these works.

At my university, I am periodically asked what patents I have obtained. There is increasing emphasis not only on making discoveries, but on cashing in. We are increasingly evaluated on how much money we can generate for the university, be it in grants received or patents that produce an income stream. This is fundamentally wrong, in my view. University professors are not given labs and offices so that they can generate patents that make money for the university. Indeed, businesses should complain that the universities have an unfair advantage when doing patentable research. Universities get funds from the public, and then turn around and patent their discoveries for the benefit of the universities. But the sponsors of that research were "the people", i.e., the taxpayers. Why should the benefits go to the university and not to the public? Granted, the universities do not pay "shareholders", so one could say that the money goes back to "the public" when the university gets that income. But that is not true. The extra money in fact goes in part to administrators who have been earning increasingly large salaries (especially in the US). These administrators are then like CEOs, and they set up more incentives for professors to do research that can lead to more "profits."  The money also pays for things like a "Research Administration Office" and a "Knowledge Transfer Office" that has staff to promote the idea of making money off of discoveries.

Most infuriating is that the idea has taken hold that if you do not incentivize researchers and professors, they won't produce innovation. This widely-accepted nonsense ignores the long history technological and biomedical progress that did not produce patents or profit the inventors directly. Louis Pasteur did not get a patent and become rich from his discovery of the germ theory of disease and his development of a vaccine for rabies and anthrax. Nor did Watson and Crick get a patent for their discovery of DNA.  In fact, James Watson has been a vocal opponent of the patenting of genes. But now Myriad Genetics has attempted to do just that for normal human genes, in a case that has made its way to the US Supreme Court.

Conservatives should be angry at universities claiming patents because they should see it as the expansion of the state into private enterprise; state money is going into research and competing with business for innovation and its resultant profits. Liberals and radicals should see this as a business takeover of the public interest, as commercially motivated research projects gradually crowd out and replace projects that might be of broader public interest. So whereas we once would have expected universities to do research on public health problems like malaria, the same commercial pressures that lead drug companies to concentrate on the illnesses of the wealthy are going to drive research in universities away from malaria research. 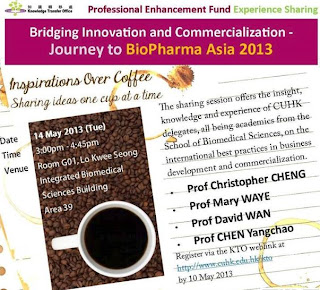 When I got the above message in an email, I initially thought it was a parody. The University is inviting me to attend a meeting with biomedical scientists so I can learn "best practices in business development and commercialization"! How is this different from a meeting I might attend if I were working for Eli Lilly (NYSE: LLY)? Why is a university so concerned about "business development and commercialization"? What has happened to universities doing research for the public good? Is income earned the only way we can measure what is "good"? What about numbers of lives saved (even poor people's lives)?

I had the fleeting idea of going to the meeting and asking all these "embarrassing" questions. Then I noticed I have a departmental meeting that day and cannot attend. Probably all for the better. When I once raised similar issues (arguing against allowing a thesis to be kept secret so a patent application could be made) I think I was the only one who was embarrassed. This commercialized thinking is rapidly becoming the norm. And when you try to argue that the emperor has no clothes, they look at you like you are naked.