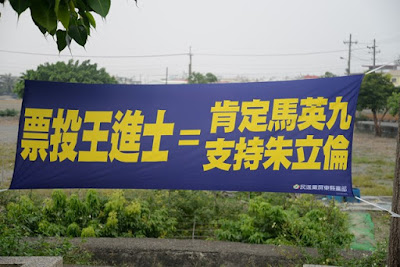 A banner in Taiwan's upcoming 16 January election caught my attention when I first saw it on 26 December in Wandan, Pingdong County, in southern Taiwan (see photo). I says:

A vote for Wang Jinzhi = Affirmation of of Ma Ying-jeou, and support for Eric Chu.

In the small print on the bottom right, the banner indicates that it is posted by the DPP, the main party rival of the KMT. Interestingly, the banner is not in green and white, the usual colors of the DPP (the KMT's colors are blue and red).

To understand this banner, one needs to know that Wang Jinshi is the incumbent representative in the Legislative Yuan (parliament) running for re-election. Having served twice as mayor of the city of Pingdong and two four-year terms as legislator (and running twice but losing both times in Pingdong County head elections), he has high name recognition and is expected to be re-elected. Still, the last election in 2012 was close, and Wang only won with 51.5% of the vote, a less than 5000-vote margin (see results here). But overall, the KMT is expected to do very poorly, both island-wide and in Pingdong, and may even lose the legislative majority which they have never before lost.

This banner is trying to tar Wang Jinshi with the feathers of the very unpopular president, Ma Ying-jeou. The DPP expects do do well in Pingdong County in the presidential ticket: the DPP's Tsai Ying-wen should handily defeat Eric Chu. But the DPP apparently worry that many voters will split their votes and vote and vote for Tsai for president but Wang for Legislative Yuan. This banner tries to prevent that by making them feel that they are voting for Eric Chu--and more importantly for Ma Ying-jeou--if they vote for Wang in the legislative race.

It is a classic negative campaign tactic (albeit mildly negative); there isn't even any mention of Wang's opponent, the DPP's Chung Chia-pin (鍾佳濱). It remains to be see whether it works.