There are few things as puzzling to foreigners as American “gun culture.” Indeed, it is hard for many Americans to understand each other on this issue as well. A recent article by Chad Huddleston in Sapiens.org (an online magazine of anthropology) does something that in our polarized environment is actually courageous: it tries to present “preppers,” those people who try to prepare for natural disasters and calamities, in a sympathetic light. This is of course what all anthropologists do: we examine misunderstood people and customs, and show how they make sense, at least to the natives. Huddleston is also interested in media portrayals, and discusses how the term “survivalists” came to be viewed negatively so the new term “preppers” emerged. Huddleston’s article notes how ordinary most members of the prepper community are, and how helpful they can be in emergencies. The extreme forms of prepping, like building bunkers, are rare—in fact there are none in his group in southern Illinois.
The preppers appeal to an ethos I actually understand, that is the idea of being prepared and able to live off the land. In a sense, it is the legacy of the “frontier myth,” and the ethos promoted by Cub Scouts and Boy Scouts. I remember as a 10 year old trying to learn to walk “Indian style”, with one foot in front of the other (and not in two parallel tracks), to make less noise and leave fewer traces, and being interested in learning about edible plants. In my 20s, I bought a copy of the US Army Survival Manual, just out of interest, for general knowledge. (You can see a copy of one such manual here. Interestingly, this is from a website called www.prepers.info and the cover page has an anti-state message “Reprinted as NOT permitted by U.S. Department of the Army, but by we the citizenry who paid for it.” I suppose there is an interesting and possibly valid copyright issue here, but note the kooky anti-state rhetoric of preppers, too, something Huddleston downplays.)

The preppers article also made me reflect on the fact that many gun owners, indeed most, are very careful and responsible with their weapons. It is really a minority that insist on being able to carry them all the time. There really should be a way to find a reasonable compromise between the extreme of anyone being able to buy and carry a gun (which is the “pro-gun” NRA position) and a complete ban on guns (which is not the gun control position, but the NRA straw man).

As a result of the Parkland shooting (BTW, shouldn’t it be called a massacre when 17 people are killed? The 1929 Saint Valentine’s DayMassacre only involved 7 deaths), many young people have taken the lead in demanding gun control. A number of proposals have been discussed, including


Missouri is definitely a gun state. Our current governor became somewhat famous (or infamous, depending on your point of view) for a campaign ad in which he shoots a machine gun for nearly the entire 30 second ad. (See Time magazine’s report here and this sarcastic take from The Verge)  He won. A Democrat who ran for senate had to defend himself against the typical Republican charge that Democrats want to take away people’s guns by running an ad showing him assemble a machine gun blindfolded, while saying he just wants more effective background checks. The Washington Post said it was the best political ad as of September 15, 2016.  He lost.

It seems hard to understand why some sort of compromise is so difficult. Sure, some extremists argue that citizens should be allowed to own any weapon they want, but it is not legal to own a bazooka or tank, so there are some limits. Once we agree on that, the question is only what those limits should be.

I remember apologists for authoritarian regimes in Eastern Europe and in Taiwan used to argue that Western-style democracy caused polarization and caused dissent. I have never been convinced of this; authoritarian regimes just suppress the dissent, along with valuable alternative points of view. At some point, those dissident views will explode. On the other hand, it does seem that in some cases, especially recently, Americans are extremely polarized on certain issues like gun control. I think the problem is not democracy, but the “special interests” that muddy the issue, at least temporarily. In the long run, these issues get resolved.

Indeed, the US has been able to resolve most of these kinds of issues. When the founders debated whether to select representatives based on population or by state, they compromised by having a House of Representatives with members representing districts of similar population, and two senators for each state in the Senate. It may not be the most elegant solution, but it works. Only on slavery were Americans never able to compromise, at great cost.

The NRA actually promotes safe gun use, and it seems to me that many and perhaps most responsible gun owners could agree to the Parkland students’ proposals, but the NRA is vehemently opposed. Many commentators have noted that the NRA has changed over the past 50 years from being an association of gun owners to a lobby group for gun manufacturers (see here and here). The NRA has expanded the meaning of the 2nd Amendment well beyond what people understood it to mean in the 1950s (see here). The percentage of Americans who own guns has been declining, as has the number of hunters. This is in part due to increasing urbanization. At the same time, largely it seems with the encouragement of gun manufacturers, an increasing percentage of gun owners now own multiple weapons (66 percent, I have read). The gun manufacturers need to encourage increased use and purchases of guns to stay in business. The gun manufacturers made a lot of money after Obama was elected in 2008 because people rushed out to buy weapons due to the fear that he was going to restrict gun sales. That did not happen. And no regulations were passed even after Sandy Hook, where a shooter killed 20 children and 6 adults. When Trump won, there was no comparable rush to buy weapons. As a result, one manufacturer has just gone bankrupt. 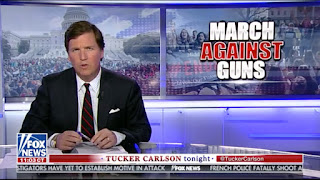 The problem is not democracy itself, but how the NRA, with the support of gun manufacturers, has been able to frame any talk of gun control as an infringement of liberty and the right to own a gun. Even now, the students are attacked for wanting to take away people’s guns. Alvin Chang on Vox pointed out that Fox News downplayed news of the march and framed it as a “March Against Guns.” Even though the activists clearly did not argue to ban guns but for specific gun control measures, Fox News portrayed “this as a much larger war, waged by liberals and the media, to take away people’s guns. It is, again, leaning into the fractures of this country and triggering the anxieties of its viewers.” Since Fox News is the main source of news for 19 percent of 2016 voters, it shapes reality for a huge proportion of the public.

Bill Clinton was in St Louis last week as part of a speaker's series (not a political event), and a friend gave us tickets to go hear him speak. The one issue he became really excited about, quite emotional, was gun control. He even joked, “You can tell I don’t care about this issue.” He noted that it is not the money that the NRA gives to politicians that matters, it is the fact that they deliver thousands of votes. NRA members will vote on this single issue. They are perhaps only 20 percent of voters, but they are a reliable block. Clinton asked the audience: “Are you willing to vote on just this issue?”

He also made a point of saying that guns are not a cultural issue but a public safety issue. At first I did not understand why that was important to him. It seems he thinks that if it is a cultural issue, then because of relativism, we just have to accept and respect “gun culture.” For example, if a group of people want to use peyote or to butcher a goat as part of a religious ceremony, we might agree to allow that as part of their culture. But we would not allow people to shoot guns into the air in celebration since the bullets can land on people and hurt them. This is an interesting point, but it is not an anthropological understanding of culture. It is very clear that guns have potent cultural meanings for many Americans, so it is indeed a cultural issue, from an anthropological point of view.

To be clear, Clinton was not advocating confiscating all guns, and specifically said that in remote rural areas, many people understandably feel they need a gun for their self-defense. He was only supporting the kinds of measures proposed by the Parkland students. This is also interesting, because it is true that some people feel more safe and secure knowing they have a gun. In reality, because the gun has to be locked away and unloaded, there are only some situations in which a gun could protect its owner. And of course, it is well documented that many guns end up being used in the heat of an arguments and in suicides, so may actually be making people less safe. But this powerful cultural view of guns as providing safety is not something that is going to change in my lifetime. And I myself feel safer in my house knowing I have a security system, even though I don’t think it really works. I have a front door that is nearly entirely made of glass, so it would be easy to “break in” and by the time the alarm company called me and determined it was an emergency and sent the police, I would certainly be either dead or a hostage. Nevertheless, having the alarm somehow makes me feel safe. Irrational, but emotionally true. Guns are probably the same: they make owners feel safe, even though they don’t actually make people safe. We have all seen enough movies where the guns save the hero that we come to believe it, regardless of the statistics. Just like we believe the home security system ads.

It is significant that everyone is finally talking about gun control. It will be interesting to see whether the movement can sustain itself, and whether some sort of compromise is possible. Extremists on either end of the debate will always object, but there should be a middle ground that well over half of Americans can agree on.