I have posted before about how AT&T keeps sending me bills for $0 to my old Hong Kong office address, and of my frustrating efforts to get them to stop (see here 11 years ago, and here 18 months ago). After my last post, I actually got a phone call from a supervisor in the southwest, and he seemed very competent and determined to solve the problem. You could say he reached out and touched me. But the problem persists! 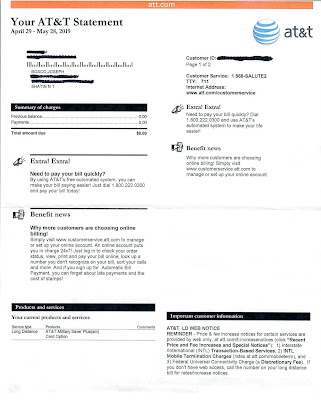 The bills never stopped coming. It has been well over a decade since I used an AT&T card. I've tried calling them, writing, sending back the bill. Nothing works. 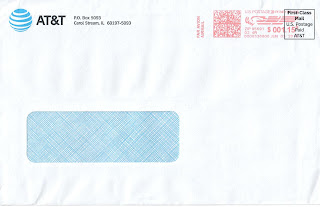 And they are still spending US$1.15 every month to send me this phantom bill. People like to complain about government services like the DMV, but this is a private company, spending over $23 a year in just postage to send me a bill for $0.

The only thing that makes this comical is that I don't actually have to pay anything. It would be upsetting rather than annoying if they were actually billing me for something and I could not get them to stop. It is astonishing to me that a company could be so big that it cannot control something like this.

AT&T's new slogan in the early 2010's was "Rethink possible." I'm beginning to think impossible.
Posted by JB at 1:02 AM

You are not the only one. I quit AT&T mobile 6 months ago for Verizon and still get a bill every month for $0 via email. I deleted my AT&T (online) account but the bills still keep coming every month.