Almost ten years ago, I wrote a blog post about my difficulties in getting AT&T to stop sending me a bill for $0 (yes, zero dollars). Incredibly, AT&T is still sending the bills to my old office. I have occasionally tried to stop them, but each time I hit a dead end and gave up. Yesterday, one of the recent letters was forwarded to me, so I decided to make another effort to stop the bills. I ended up spending an hour and a half in chats with 4 different people, AND THE PROBLEM IS STILL NOT SOLVED!!!

I don't know what is crazier: that AT&T cannot stop wasting $1.15 per month to mail me a bill for $0, or that I wasted an hour and a half of my life trying to get them to stop. 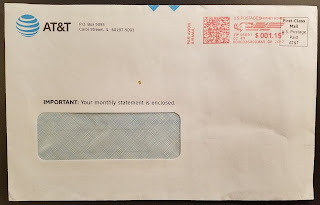 A brief summary of the old story: in the old days (1980s and '90s), before Skype and before cell phones, we used to use a "calling card" to make phone calls from public phones. Instead of having to deposit a lot of change, we called a toll-free 800 number, then put in our card number and a PIN, and then dialed the number we wished to call. Every month, we got a bill in the mail, and paid by check. (I know, it sounds very archaic.) We had a Sprint card, and then for some reason we switched to AT&T. We did not use this card to call from Hong Kong, because long-distance charges from Hong Kong were always much cheaper than from the US. But when we were in the US, this was the only way for us to use public phones to call other US numbers.

Once cell phones were available, in about 2004, we got a "pay as you go" SIM card for our phone that allowed us to call and receive US calls. We had no monthly bill; we paid $1.00 per day that we used it, and $0.10 per minute. We paid in advance, and our calls charge were deducted from our account. It was great, and we kept that phone number until we moved back to the US. That plan was originally from a company called Cingular, which was later bought out by AT&T. But this SIM card never was linked to the calling card (this is an important detail for below).

Back to the present: I have called the 1-888 toll free number in the past and know that the first step is that one has to input one's phone number or 16-digit number that I don't have, so I tried by going to the www.att.com/customerservice website, as directed by the bill. Very soon, a chat window appeared, so I decided to reply to Laura, and tell her I'm trying to stop the $0 bills. She transfers me to the billing department, where I speak to Charles. (I'm using their "real" names because it seems they are all in the Philippines and are not using their real names anyway. AT&T has a nifty feature where I was able to get a transcript of my chats.)

Charles asks me all sorts of questions, I repeat what I'm trying to do, I wait for a while, then he asks me for my phone number in case we get disconnected. I think, how nice, so I give it to him.

So, when he asks if I have wireless services, I do not understand that he means "Are you getting wireless services from AT&T?" In fact, I am not. But basically, he did not know what to do, so he dumped me onto Annabelle! And I told her so.

As you can see, I had to start over, explaining that I am indeed in the USA....
She then tells me to call a phone number for the GoPhone department, even though I assure her it has nothing to do with phones.


As I feared, the number was of no use; I do not have the numbers they want for me to move forward with the call. The voicemail just hung up on me.

I was livid. Fortunately, an AT&T survey popped up, so I gave them all zeros.

To my surprise, another window popped up, saying they were going to upgrade the case, asking if I was willing. So, of course I agreed. Now I was talking to Medwin B. Interestingly also was very confused about calling cards; I had to describe the whole process to him, and explain that it was not a prepaid calling card.


Then he asked if I could send him a scan of the bill, and I said I could. Here is his text:
I did both. To my great frustration, it turns out both the email address and the phone number are for AT&T's charitable foundation. I got an auto reply email that began:


Thank you for contacting the AT&T Foundation.  Our funding priority is our Aspire Program.  We are committed to supporting organizations implementing verifiable, evidenced-based interventions focused on improving high school retention rates and preparing students – especially those most at-risk – for college or career.

He, like Annabelle, and Charles, just dumped me. My case was probably lowering their performance on their metrics. I'm insulted that they pushed me off so easily; I feel like a fool for falling for what is obviously not relevant. What is annoying is that AT&T has all sorts of features, like the survey and the chat function, and the record of the chat, that are designed to provide good service, but they don't have PEOPLE who can navigate their system properly to solve a problem.

I am not entirely altruistic in trying to get AT&T to stop, so they save the wasted postage; in the back of my mind, I'm worried AT&T will start charging me for my non-existent card, and then I'll have bill collectors chasing me. I'm totally at a loss as to how to stop this. It is a both funny and frightening example of Kafkaesque bureaucracy.

I wonder if I switched my cell phone plan to AT&T whether they would be able to resolve this. I don't dare try.