The July 26 Floods in STL

Many friends have reached out to check that we are OK, given the news coverage of the flooding in St Louis, so I thought I’d write a bit about our experience. (BTW, it is a sign of America's influence [hegemony?] that people from all over the world know about flooding in my city, but floods have to be very serious before we in the US hear about it.) (You can see some pictures from weather.com here  from the National Weather Service here.)

First of all, I slept through the entire storm, which started late at night. So either I sleep very soundly, or, more likely, the storm was not very noisy. But I did wake up to find an emergency notice on my phone (which had not rung because it was in “Do Not Disturb” mode) saying to stay home because of flooding on many roads. My wife spent the day working from home.

Early in the morning, my wife had gone to the basement to exercise, only to find water pouring from a small hole in the wall.

Our basement is not finished and has drains in the ground, so the water drained out or collected in shallow puddles that we were able to clear out. At first, I wanted to use a mop, but we don’t have one. Then we realized we have a “wet/dry vac” (AKA “shop-vac”, which is a brand name--that company announced it was closing down in 2021, but then was bought by a Chinese company), which is like a vacuum cleaner that can pick up water. This is a pretty standard American home appliance that I don’t think is very common in Asia. Worked great. 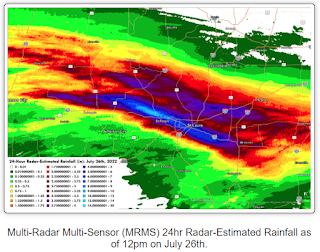 Our house is not in a flood-prone area, but when there is this much water in the ground, some water can seep into the basement. While we were in the basement, I also heard our sump pump go off for the first time ever; glad to know it actually works. (Sump pumps are water pumps placed in the lowest place in a corner of the basement to pump out into the back yard any extra water that collects from below). It only stayed on for a few seconds. Since the previous owner’s sump pump had been broken when we bought the house, and she had not noticed it, I was not sure we even needed one, but I guess we do.

Previous floods that I know of have occurred because of rising rivers, with the rain and melting snows coming from much further north. In this case, we were victims of a very strange weather pattern. You can read more about it at the government weather website here, but basically, the rain was trapped between weather patterns to the north and south of us, so the rain, instead of passing through as a vertical band from west to east as usual, became what they call a “train” (as in railroad train), with constant rain for over 6 hours. That is why we were dumped with 6 to 12 inches of rain in about 15 hours. You can see the moving radar map at theweather.gov website. 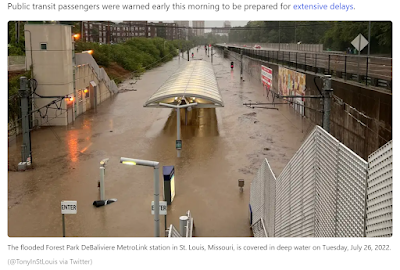 As always, it is the poorer neighborhoods that suffered most. They tend to be in lower areas. And in our town, there is a river, River Des Peres, that has been channeled and actually goes underground through Forest Park. Except that with so much rain in such a short time, it could not drain fast enough. It ended up filling the train track of the MetroLink, our subway system. 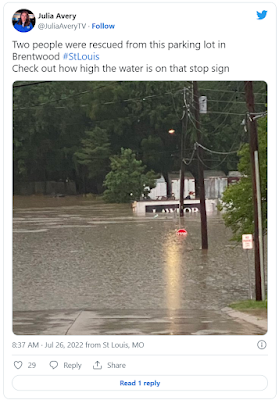 In another neighborhood nearby, the water reached up to a stop sign! The weather service said that we had the equivalent of all of July and August's rainfall in just one day, and of course we broke all records for precipitation. It may not be due to climate change, but it is not normal. So yes, we are fine. But maybe the earth is not.
Posted by JB at 12:36 PM